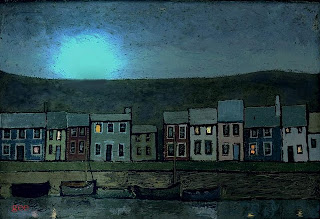 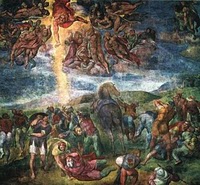 If God created everything,
Then he created me!
He gave me a slow, pedestrian brain
Bogged down in reality.
It was quite a different case with Saul,
For he was a Chosen One,
Though his youth was not propitious
When all is said and done.
It seems he viewed the Christians
As something less than dirt
And saw the followers of Christ
As people to convert.
However, the Road to Damascus
Was the site of his miracle cure,
And God created this famous scene,
Some people are quite sure.
Now, He either gave Saul the type of brain
To cope with things mysterious,
Or else He actually sent a Light,
Blinding and quite imperious.
In either case a change of heart
Was rapid and extreme;
Saul suddenly realised that Christ
Was God who reigned supreme.
He changed his name from Saul to Paul,
He threw off all his fetters,
And from henceforth he spread the Word
In deeds and speech and letters.
Fortunate Saul, to be picked-out
For this quite amazing act!
I'll never see a blinding light
And change! And that's a fact.
For God, if indeed he made my brain,
Has bogged it down in sludge;
Seeing both sides of questions
And disinclined to budge!
I'll never see a vision.
(Well, I haven't up to now).
Humdrum facts, it seems,
Are all that brains like mine allow!
When it comes to religious yearnings
I'm afraid my cupboard's bare!
So, if it's true God made my brain,
Is He completely fair?
*
Posted by Rinkly Rimes at 5:03 AM

that is so sweet. I think you & he may be kindred spirits.

I've also seen art that causes me to remember.

I really like this picture - tried to google Gerald Gee, but only got as far as your other post...
Sometimes I will see art that makes me wonder if it is reminding me of a previous life when nothing in it is familiar, yet it draws me and makes me feel so a part of the scene.

I like it you are sweet dear. Happy BM!

I love good art and have a few pieces. I am not familiar with this one. He does very nice work.

I love this painting, I feel like I could get lost in it and wonder the streets and waterfront for hours.
Thanks for sharing..
Molly,