BRY ANTICS
January 31st
After a very quiet start to the month and a fairly restful week last week, this week picked-up speed with a vengeance! My overseas visitor arrived. His name is Rob and we were teenagers together in the Staffordshire village of Alton 62 years ago. We hadn't seen each other in the interim but we settled into an easy relationship without trouble. This was made possible by Rob's phenomenal memory. He reminded me of things I'd forgotten. How, for instance, I'd been dancing with him when he was on leave and in his naval uniform, when the band struck up 'All the Nice Girls love a Sailor'. Evidently I was so embarrassed that I ran from the dance floor! That must have done his ego a lot of good!

At Merewether Beach
The above is Rob (left) with Malcolm, the first evening he was here. We took him to see our vicinity even though the weather wasn't as blazingly sunny as he'd expected. It had been about 5 degrees when he'd left England! It inched towards 40 degrees the whole time he was here but he didn't worry too much!

Choir and Audience
The next day my Probus Choir gave a concert and both Rob and Malcolm braved a sea of grey-haired ladies to listen to it. He said he enjoyed it!

Bush Walk
In the afternoon we took him for a bush-walk. The bell-birds were singing like mad so that added to the atmosphere. 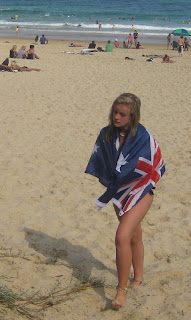 Patriotic swimmer.
Later we took him to the beach. People were just packing-up after the Australia Day Celebrations (which we avoided)but I did get this shot of a tired reveler trudging up the beach. 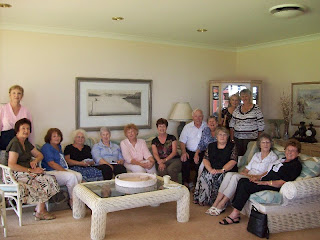 The Merry Mellows plus Rob.
Wednesday was an important day for me as all the Merry Mellows (the group for whom I write melodramas) met for the New Year get-together. We ran-through three plays and nutted-out details of dates, holidays, bookings etc. We had the party at friend Roz's large house. Errol, her husband, took Rob and Malcolm out in his boat and on the dunes in his four-wheel drive while we were 'performing' but Rob posed with me in this picture.He left the next day.
The next excitement was Harry starting school. I'll add several photos here and then my son can copy them from this blog. 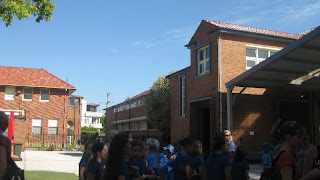 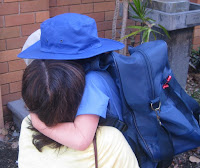 A fond farewell to Mummy. 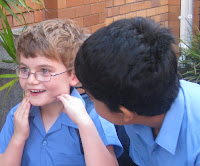 Harry meets Jasper.
Jasper is Harry's Buddy. He is an older boy chosen to assist the small children and he seemed a delightful boy. 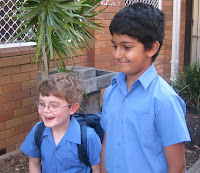 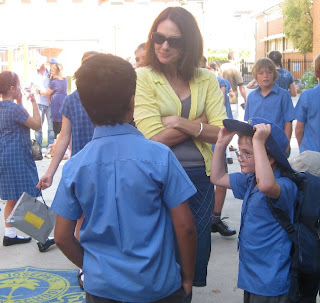 Mummy chatted to Jasper.
Harry disappeared inside and we all clamoured for news when school ended. All he said was 'My teacher is beautiful!' 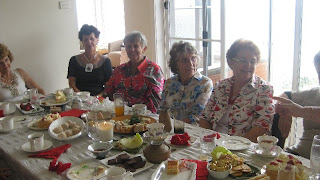 Bev's Birthday Party.
My week ended with a birthday party. (And a visit to the doctor confirming my claudication. That was the only drab note in quite an exciting week).
Till next week.
Brenda

What a lovely reunion you had with Rob, Brenda. And the excitement of Harry starting school - too cute. Have a good week.