And so I resume my diary. I let it lapse for a while because, quite honestly, I didn't have much to write about. January is a very quiet month in Australia, unless one is away on holiday, and we would never go on holiday when the heat is at its peak. We tend to stay in because of the heat, in January, much a wrinklies in the Northern hemisphere stay in because of the cold. We put the air-conditioning on and do odd jobs. At least, I do. Which means I now start the New Year proper with a reasonably tidy house and everything (nearly everything) sorted. I organised the publication of my poetry books and prepared the coming year's melodrama program for instance.

Of course, my life fades into nothing when I consider Haiti. In fact, one feels almost guilty about enjoying life, but, apart from donating what one can afford, what can one do? The results of the earthquake have dominated our news bulletins.

Australia has had incidents of its own, of course, the most worrying being a spate of attacks on Indian students in Melbourne. Some may have been straightforward robberies as Indian students here are usually affluent, but there has certainly been a racist element as well and that's nasty. It's caused a rift in our relations with India itself.


But one rather good thing came of it. The composer who wrote the music for 'Slumdog Millionare' gave a free concert at the Opera House in order to improve race relations, and it was a great success. There were lots of 'Europeans' among the enormous crowd.


We've also had a visit from Prince William and that has caused quite a flurry of excitement. I'm not much of a royalists (I'm in favour of Australia becoming a Republic) but I thought he was very charming and gave a good impression. 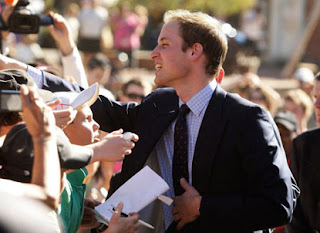 
The photograph below was taken at the Australian Open Tennis Championships and I found the TV coverage of this very endearing. When the crowd clapped him he actually blushed. That couldn't be feigned and I almost became a royalist there and then! I feel quite sorry for him as he proved himself to be naturally shy and he's got such a tough job ahead of him.


My week was still quiet on the whole, although we enjoyed our first Book Group meeting of the year,and the Scrabble Group met as well. One evening we went to friend Pam's for a meal. But it was very quiet by comparison with the Christmas season! 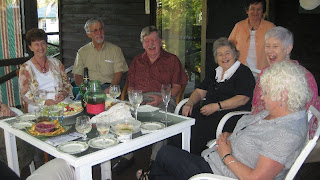 Pam must have said something very funny at the Book Group!


The photo below is not me (you may have noticed) but it's just a shot of someone suffering the pain of Claudication, with which I have just been diagnosed. It used to be called Hardening of the Arteries (how aging!) Like this gentleman I have been suffering pain on walking. I had the scans done during the week. I'm hoping it can be cured with a pill, but a friend had a stent inserted into the blocked artery for the same thing, so I'm keeping my fingers crossed!. 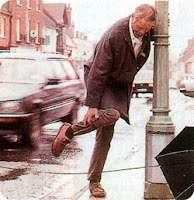 As a foot-note, I was very amused to see this notice at the Printers' when I went to organise my books! 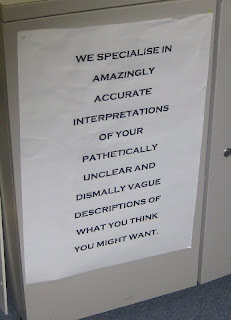 It says it all!

By the way, blogging will take a back-seat to entertaining this week, so forgive me if my comments drop-off.


Till next week,
Brenda

Hi Brenda;) I'm glad to see your diary again! When in South Africa, we spend a while indoors during the winter. I catch up on tidying up and planning my garden for summer and also more writing and blogging. Ditto to feeling guilty that we're living and those poor people in Haiti are in such dire straits. Oh and I am sorry you have Claudication. I hope you get relief soon. Have a good week!

I enjoyed your January diary. Nice to see a slice of your life.

William does seem like a thoroughly nice lad but like you I'm not a royalist. I think Australia should become a republic too.

I'm not keen on having Charlie boy as king and I think a lot of people feel that way. Hope Lizzie keeps going for a while yet.

Very interesting post. Sorry to hear about your problem. Do hope it can be taken care of soon. Book group and Scrabble groups sound like fun times.