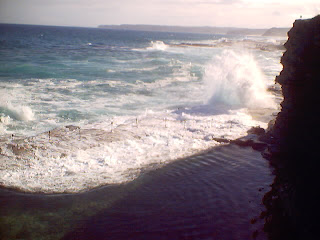 THE CAULDRON
Two hundred years ago, well, give or take a bit,
A pool was fashioned in the rock near us, and this is it.
It's called the Bogey Hole and it's a favourite spot
For swimmers to enjoy themselves, when the weather's hot.
But, of course, time takes its toll on things and the steps are wearing thin;
They're slippery and it's quite a feat to climb up or climb in.
Not only that but the seas are rough, the waves are ever churning,
And rogue waves tend to crash and boil, catching swimmers in their turning.
Of course, it's dangerous! That's clear! Daredevils like it so!
When young men want to prove themselves that's where they like to go.
Now the Council wants to close it; 'Too Dangerous' they say,
And many folk are up in arms crying 'Don't take it away!'
And so, dear readers, I ask you; what would you decide?
Should the Bogey Hole be closed and the dare-devils denied?
Life's precious, yes, of course it is, but it also seems to me
That it's up to the individual to take responsibility.
We molly-coddle folk today, they don't take the hard knocks,
Though generations long before braved the wild waves and the rocks.
I'd never dare go near the place, not even in my youth,
I was an arrant coward! I still am, and that's the truth.
Councils, and others such as they, demand too much control.
I ask you, readers, yet again....should they close the Bogey Hole?
*
The convict history of the Bogey Hole here:
http://rinklyrimes.blogspot.com/2009/01/286-bogey-man.html
Posted by Rinkly Rimes at 10:35 AM

It's a beauty.
Sydney - City and Suburbs

Thats a beautiful shot Brenda, thanks for sharing.

All the best
Guy
Regina In Pictures

What an amazing blog! Thank you for visiting TBB because it means I found your blog here! :)

Very interesting. I think they should keep it open, but put warning signs around it. "Enter At Your Own Risk!" or some such thing.

Just gorgeous! Times they are a'changing. Thanks for visiting my blog! ~karen

I tend to agree, we make life to safe, try to save people from themselves. Post it dangerous and leave it be.
Of course, there is the issue of liability. Here in the States people are free to sue others for what is, in fact, there own act of stupidity.

What a beautiful place! Great shot!

I agree with what others said, post a sign to warn the people that it is dangerous.

Thanks for the visit

Intersting post! reminds me of a similar place which I visited in Portugal in August - it's called (translated) 'Hell's Mouth" - says it all!?
Gena @ thinking aloud

Lovely shot! Mother Nature will always take back what she wants. I don't know the answer to the question - good luck.

A warning sign is enough for me. Having been warn we can make decisions for ourselves.

It is a gorgeous scene. maybe they should just post it as dangerous and leave things as they are.

Your photo is of wild beauty.
whether or not to close Bogey Hole. It seems that folks are responsible for their own actions.... A sign seems like enough.