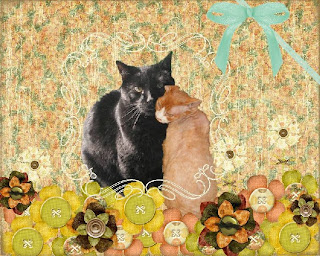 MY TRUE COLOURS
http://poopsiestruecolours.blogspot.com/2010/02/cinnamon.html
CINNAMON
THE CINNAMON CAT
I'm a black tom-cat, all sleek and fat.
A no-nonsense cat, never doubt that!
I eat fish-heads found in the gutter;
Stale bits of bread with rancid butter.
I howl with rage in the dead of night
To give old ladies an awful fright.
My name is Blade, a good strong name,
A name that puts pussy-cat names to shame.
My fur is as black as the jet black night,
And my eyes shine with a malevolant light.
I'm rough and tough and entirely male
From the tip of my nose to the tip of my tail.
But something's changed, I'm a ball of fur!
I love to cuddle! I love to purr!
I've never been in love before!
But now I've met Cinnamon, the cat next door!
*

Excellent. I love cats (have seven at home in SA) and this black cat looks just like my Puff at home.

That is just so sweet.
And your Cinnomon cat is a dead ringer for Misses Peach
http://misspeachsmeowz.blogspot.com/

Enjoyable and very well written poem
Thanks for sharing :)

What a cute post for today. The poem of the kitty is very good.

I absolutely love it !