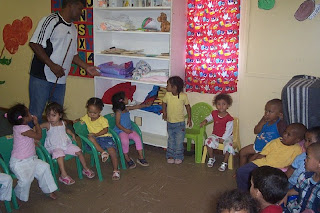 COLOUR CARNIVAL
http://colorcarnivalmeme.blogspot.com/
MIX 'N MATCH
When I was in South Africa a couple of years ago,
I visited a Pre-school for a while,
And the sight of all the toddlers in their colourful attire
Was something that soon conjured-up a smile.
Most of them wore hand-me-downs, donated by kind people,
But all of them were neat and smartly dressed.
And their manners and behaviour were impeccable as well.
To put it briefly, I was most impressed.
I had lived in South Africa during Apartheid days,
When a gulf was yawning in between the races,
And a European woman would not have been allowed
To visit many purely African places.
So this was most refreshing! Toddlers who'd grow up
Without the dreadful barriers of the past.
I left with a sense of optimism, for I truly felt
That equality was on the way at last.
*
A sadder view of Africa here:
http://rinklyrimes.blogspot.com/2008/12/230-lost-limpopo.html
Posted by Rinkly Rimes at 6:30 AM

It is beyond belief that anyone could feel anything but love for these cute toddlers. Racism is a terrible disease

and, how beautiful they all are!

This is great, I am sure you enjoyed your time with them.

Oh the places that you've been! What a pretty sight and a touching rhyme.

What a shame some people insist on keeping those barriers in place, and pass it on to their children. Too bad we can't all accept human differences as easily, readily, and welcomingly (new word) as we do colors.