BRY ANTICS
February 6th
Well, it wasn't the greatest of weeks! It was my birthday on Monday so I should really have had fun, but that didn't eventuate! Early in the morning my son, Greg, brought Harry round (they only live next-door, temporarily) and asked us to mind him as he didn't feel well enough to go to school! He only started school last Friday, so that was a bit of a blow. However, worse was to follow as it became increasingly obvious that the poor little fellow was really ill. He had the most violent cramping pain in his stomach and he was literally writhing and screaming most of the day. However, Greg had said that 'something was going around' and we shouldn't worry too much so we waited till he came home. He could see immediately that the child was in a terrible state, and sought medical advice straight away. The upshot was that Harry ended up in hospital with a severe bowel problem. Part of the bowel had slipped inside another part and he'd become completely blocked-up. (I was told the medical term but I forget it.) Air had to be injected to clear the way, and one or other of his parents had to stay in hospital with him. This made them stressed, as they should have been at work, so life was rather hectic all round. Anyway, Harry has recovered now and he actually resumed school on Friday. But what a birthday! (No photograph of this drama!).


One bright spot was a Birthday Acrostic from Amias. She couldn't have said anything nicer!
Brenda
Blending words
Remarkably well
Entertaining many
Notable tales
Done without waste
Author with taste
I hardly used my camera during the next two days, which weren't all that auspicious, anyway. On the Tuesday our Choir performed at a local Probus Club; the Speaker went on far too long and our program had to be curtailed, making our choir mistress very tetchy! Malcolm and I left immediately because I was doing a local poetry program at a Friendship Club. I went down like the proverbial Lead Balloon. Half the audience was so elderly they were asleep and the other half didn't 'get' my jokes! In the end I gave up and said 'Would you like me to tell you about my experiences as an English Evacuee in the War?' They seemed to enjoy this much more! So much for being a Performance Poet! 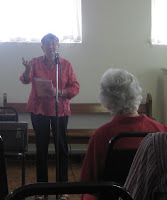 Trying my hardest!
The next day, Wednesday, my Melodrama Group performed 'Unhand Me' at the Panthers Club. Unfortunately, all the catering staff had been sacked in the morning and the refreshments were twenty minutes late! So our play had to be rushed and cut short! It definitely wasn't my week!
Two days after my birthday I celebrated it by going out to dinner with my friend, Vera, whose birthday is on the same day. Angus and Malcolm came too, of course. We went to quite a smart restaurant and had a tasty meal. There is a photograph of this, the only highlight in a rather drab (and very hot and humid) week! 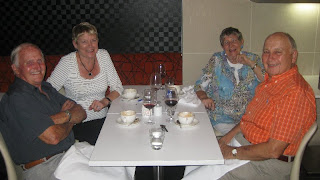 A shared Birthday meal.
Till next week.
Brenda
Posted by Rinkly Rimes at 7:09 AM

Happy birthday, Brenda! I'm sorry it began so badly (and trust little Harry has sprung back with youthful resilience) But I am glad you had a nice celebration with your hubby and friends later on. Oh I had to laugh at your performing poet saga. I'm glad you could save the day with the stories. I have stood in front of such an audience which turns my mouth dry and my words fade away... May you have a wonderful week.