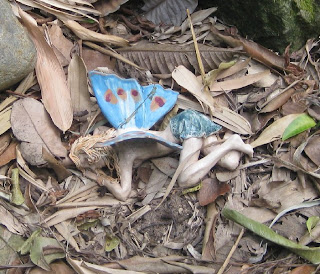 Brenda Bryant
BLUE MONDAY
http://smilingsally.blogspot.com/2010/02/blue-monday-barely-blue-family-room.html
FEELING BLUE.
Let's get whimsical, shall we? Let's try some fantasy?
I was strolling along a bushland path when what should I chance to see
But a little blue-winged fairy among the Autumn brown,
A little blue-winged fairy that must have fallen down.
Were her wings too fragile? Was the wind too strong?
Did it take her far from home while blowing her along?
Is she a youthful fairy, still in need of care?
Or is she really past her best and she's just dyed her hair?
Come to think of it, is 'she' female, or is there a touch of male?
After all she could be both at once as this is a fairy-tale!
Did this fairy try some magic and fail at her endeavour?
Will she lie and sob like this for ever and for ever?
Will Summers come and Summers go and cover her with leaves,
While all the while she lies like this and no-one knows she grieves?
I could have turned her over, but that seemed to be intrusive;
After all we know at times we want to be reclusive.
And so I continued on my way forgetting, till today,
That I had seen a fairy weep, and simply walked away.
*

Beautiful little poem, going to send this page site to my one brother. He loves fairy's. For his Grandkids, he had a fairy garden, and several places on his house and garage, he's made little fairy doors. But now that the Grandkids are getting older and aren't into fairy's so much, he's replaced his fairyland garden with a tepee and a huge tree house.

I loved you whimsical moment, and the picture is priceless.

If you took the photograph, then someone you know must have this wonderful fairy figure? Intriguing shot!

You have such a creative mind, Brenda! Happy Blue Monday.

You really came up with a different but, interesting blue showing for today. Very clever of you.

Oh how I would love to go find this wee fairy and make sure she is ok. Lovely post.