This week has been unbearably humid, but at least we're heading for better weather. Also one has to rejoice in the fact that the rainfall in drought areas has continued to be good. So we can put up with our local version of it. Sydney and the Gold Coast have both had flooding; funnily enough, although we lie between them, we certainly haven't really suffered, except for the humidity.

Our local news has been dominated this week by the Scandal of the Pink Bats! No, not an animal! Pink Bats is the local name for roof insulation. Last year, when the Credit Crisis was at its worst, our Government panicked and hit upon a scheme for helping the economy and Global Warming at the same time. Very cheap Pink Bats were made available and people were employed to distribute them, and to install them. Unfortunately 'shonky' people got in on the act and there have been four electrocutions and several house fires as a consequence of the jobs being botched. Now the responsible Minister is being called a murderer...... by the opposition, of course. Peter Garrett, the Minister, used to be a Pop Star! 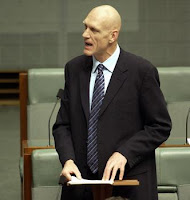 However, not everything in Australia can be 'shonky'! This was a list of the world's ten best cities published this week. Australia scored four out of ten. And that's without counting Newcastle, the little city in which I live, which is even better than the others! Sorry to boast!

As for my own life..... The week started slowly and it wasn't until Wednesday that my social life kicked in. My melodrama group members have asked me to write an Australian melodrama! All of mine so far have been based in Victorian England, so I said they'd have to help me. So we decided to workshop a plot. We met at The Cricketers Arms, and the proprietor actually not only opened the pub early for us but baked us a wonderful selection of pastries to eat with our coffee! We had a great time mulling over ideas and I now have the germ of a plot nestling in the deepest recesses of my brain. Here we are, discussing (with me resembling an unmade bed!) 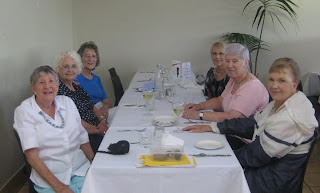 On Thursday it was my Family Day again and the weather was delightful so Rebecca and I took Max down to the beach and then to a shady park. Here are a few shots. As you can see from the final one, Max is finding his feet! 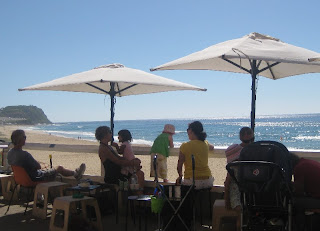 There were a few people enjoying morning coffee. 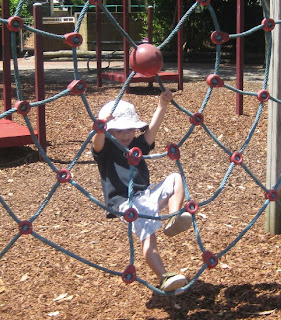 Max at the park 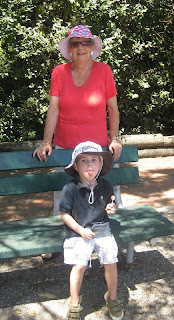 Today I've been down to the Central Coast by train (blissfully air conditioned) to meet up with old teacher friends. We all taught at the same school twenty years ago and I really enjoyed being asked to take part after such a long time away. It was lovely chatting over old times. 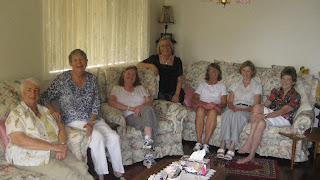 Greg and Michelle drove all the way to Manly (Sydney) with the boys to go to the Aquarium. I think they find the boys easier to manage in an air-conditioned car!

A highlight of my week was the arrival by post of a birthday present from Kat, an Indian admirer of my poetry! (Maybe I'm a Cougar!) It was a specially ordered mug with my name on it plus the letters QOP, which he assures me means Queen Of Poetry! Wasn't that nice!

Till next week,
Brenda

Oh the drama sounds very intriguing! And I have learned a new word, Shonky! Oh I love it. Is this the equivalent of "Dodgy"?

Will definately be dropping this into my conversations over the coming weeks Brend! Thanks. Dxx

Sounds like your busy week started later in the week, but it also sounds like you packed a lot into those last few days. Happy Birthday when ever it is, I noticed you mentioned about a birthday gift. Sounds like it was a nice gift. Also Happy Valentines Day tomorrow.

I guess Peter Garrett, your Minister, is discovering that unintended consequences mean that no good deed goes unpunished.

I love the photos; especially the ones of you and Max. (Why do little boys always want to stick out their tongues when having their picture taken? My son did the same thing.)

Peter Garrett looks a bit like the Duke of Edinburgh as I remember him! It is probably just the angle how the photographer captured him. I am on Long Island at the moment and the kids are playing in deep snow in the backyard - they have made a slide and use snow boards. I see very few slays these days! I mention this as you mention the heat of the day there!

Goodness, what an action packed week or so for you! I so loved the photo of Max sticking out his tongue, ah brings back memories of my children doing the very same!