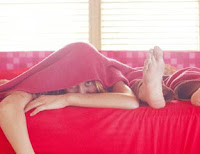 CARRY ON TUESDAY
http://carryontuesday.blogspot.com/2010/02/carry-on-tuesday-41.html
The words in blue are the opening lines of
Michael Crichton's 'State of Fear'.
BLANKET CREEP!
In the darkness he touched her arm and said
'Every single night when we go to bed
It's the same old story, blanket-creep!
How am I ever going to get to sleep?
Night after night, it cannot be denied,
You roll over and drag things to your side.
You're curled up there, like a cosy little mole,
While I never seems to have the same control!
Look at me now! My right side's all exposed!
You're snoring and I haven't even dozed!
When first we married I was quite prepared
To tolerate the night-life that we shared.
I'd take the direction of the departing sheet
Moving over, and that was rather sweet.
It often resulted in a little cuddle,
Even though the bed was in a muddle.
But now that we've been married thirty years!
I tell you, dear, it's going to end in tears!
Right here and now I give my final warning.
I'm going home to Mother in the morning!'
*
Another sleep drama here:
http://rinklyrimes.blogspot.com/2009/06/lady-in-waiting.html
Posted by Rinkly Rimes at 9:48 AM

Oh so very amusing. I loved this and it brought a big smile to me!

Hahaha I enjoyed reading this. So such fights are common everywhere?

Shy nail biting cuddle fights
and then pillow fights
and graduate to blanket fights
and finally only fights....

This is so funny! I sleep alone and even my duvet goes lop sided! Must be the sheet-creep fairy!