BRY ANTICS
February 28th
I found the news about the breaking-off of the iceberg in the Antarctic the most worrying thing this week. They say the effect wont be felt for decades, so I don't know why I concern myself with it, except that I don't want 'my little boys' to have to cope with anything nasty! It's the size of Luxembourg! It occurs to me that Australia could tether it and use the beautiful fresh water in it to ease our chronic water shortage, but I suppose that's fanciful!  (I think there might be a poem in that idea!) I was also saddened by the floods in Madeira, as this was a place I often visited when I worked at sea. I remember it as being idyllic.

Madeira mud floods
My own week started pleasantly with a trip to the Central Coast to see a play. We all met at 'The Doylo' for a meal on the way. (The name 'Doylo' is a typically Australian nick-name; it's really The Doyalson Club' but no-one ever calls it that!) The play was 'Wrong Turn at Lung-fish' which I expected to be a comedy, from the title. It had funny moments but it was really quite deep. I liked it. Imagine my surprise when I read on Google later that it wasn't considered much of a play! So I'm a poor critic! Here we are outside the theatre before we set-off home. (Les, the driver, had gone to get the car). 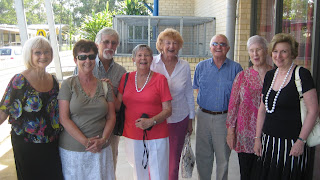 Outside the Theatre
On Monday we had our Probus meeting and we were given a talk by a University professor on play-writing. It was rather a high-flown lecture at first, but, after he cast aside his notes it was informative and entertaining. He said something regarding writing which I'm only just taking on board. 'Write for yourself'. In other words don't worry about an audience; just have fun. In the afternoon we had our choir practice. We're learning 'Hallelujah' with harmony but our Choir Mistress is rather straight-laced and she has written new lyrics for it! It's great to sing, anyway.
On Wednesday Malcolm drove me over to the Lake Macquarie suburb of Toronto (!) to read poems. It was a fantastic audience and, for the first time, I sold-out of my poetry books! I went home quite elated. Only to have my day dashed during the afternoon, when I expected five people for a rehearsal and only two turned up! Never mind, the little boys came over later on. As soon as they arrive they ask for Shaun the Sheep! It's Malcolm's favourite show too so he doesn't mind showing it to them. 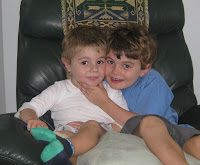 Shaun the Sheep.
Thursday was my day with Rebecca and Max. Rebecca had organised some painting for him and, as you can see, he loved it.

Work of art in progress.
We then went to the park and the lake, where Max enjoyed throwing rocks into the water, and we bought Brian a birthday cake on the way home. (And I've just realised I didn't put a birthday greeting on my blog! Not that that will worry him in the least!) Here's a belated greeting Brian!
HAPPY BIRTHDAY!
On Thursday evening I invited a few members of the melodrama group round to watch a video of last year's show. Here's a shot. 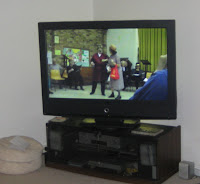 Here are Pam and Loretta arguing.
On Friday we had a read-through of this year's play 'The Red Barn' but that had its disappointing aspects. The reading was fine, but I discovered that most of the cast will be away when we have 'Xmas in July' shows later on in the year. So I had to ring the Clubs and cancel. A group is going to the Blue Mountains for a Winter Break. I had decided not to go because we were there only last year and we didn't have a great time. Because of the absences I spent the evening rewriting one of the plays for a reduced cast. Unfortunately (or fortunately, really) Rebecca and Blake came for the evening. We all went out for a meal and then saw the film 'An Education'. I wasn't greatly impressed though I'd looked forward to it because it was set in 1960s London and it was a true story. Anyway, I burned the midnight oil later and got my re-write completed. Pam Boyd came round for a read of it on Saturday morning and I was quite chuffed at her response.

Michelle's brother is still in a Sydney hospital. He wants to fly back to Hong Kong at the end of the week, but he still looks ill and no decision has been made about future treatment, as he's no longer suffering symptoms.
Till next week.
Brenda
Posted by Rinkly Rimes at 7:23 PM

Brenda;) you know how I look out for your Sunday diary. I didn't even know about the ice-berg breakaway (don't read the news - have no television!) I'll look it up. I'll look out for your poem about using it for the Australian water shortage. I liked the idea to "Write for yourself" I'll try that. I love your little boys. Happy birthday Brian. We go out to SA next week for our three week break. Have a good week.

The iceberg item certainly reinforces the belief that we are in the midst of climate change.

You are fortunate to have such a nice group of friends to share outings with. Red certainly becomes you and you look so happy.

Critics aren't always right. I have enjoyed movies they gave a thumbs down to and visa-versa.