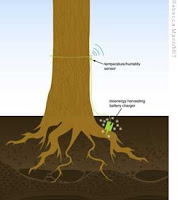 By an article which stated

That there's a charge of elctricity

Which can be tapped from a growing tree!

Not enough to save the earth

But an amount of a certain worth.

At the moment men patrol

Watching for bush-fires; that's their role.

There are also alarms which are quite expensive,

If we used the power of a tree

Back to the main fire-fighting station,

We'd be saving many an hour

Of man-hours and expensive power.

I'm very keen on this because

In a bush-fire country such as Oz

The looming summer holds a threat

That mankind hasn't defeated  yet.

Let's hope it's not a vague pipe-dream

That never gets to the world's main-stream!

I'll listen and wait because, you see,

Not such a useful use for science here: