For Your Own Good 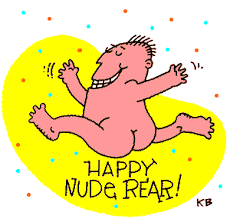 
FOR YOUR OWN GOOD

I only publish this 'naughty' view
Because I want to preach to you.
It's for your own good that I do it!
( Just so you don't misconstrue it!)
I find this offensive, very!
It makes my New Year less than merry.
I blush when I look at this pinkish flesh
(He'd be tanned if he came from Bangladesh.)
Let me repeat, for all I'm worth.....
This doesn't raise the slightest mirth,
Not one giggle, or one guffaw;
For I am a person without a flaw.
I do not laugh at nudity!
And innuendo's not for me.
The 'double entendre', much in demand,
Is something I don't understand!
I do not mix with hairy blokes
Who tell disgusting dirty jokes.
No, I am pure, as all can see.
And I urge you to be pure like me.
It will be good for your constitution
If you make a New Year resolution
To cast aside all thoughts of smut
Tittle-tattle and scuttlebutt.
Daily read my blog and you
Will be a perfect lady too.
Unless, of course, you are a male
In which case my sermon's bound to fail!

Could anything have more elegance! Could anything have more charm?
Is anything more inclined to dazzle, fascinate, disarm?
The ballerina's tutu is the emblem of the dance,
Made to complete the picture, should she point or leap or prance.
But why is it called 'tutu'? When you learn its history
You'll find the reason reaches to the depths of banality!
*
Marie Taglione, in 1832,
Wore the very first ballet skirt, when the art was only new.
Rather than reach down to the ground, like the fashion of the day,
The hem was above the ankle in quite a revealing way.
This was considered daring, but it was so created
To reveal the fancy footwork the crowd anticipated.
Undergarments were revealed , never viewed before,
And reasons were quite dubious when folk called out 'Encore!'
*
The cheaper seats were situated where the crowds still could not see
A full view of the dancer's feet, and her great ability.
And so they used to crane their necks and lean and twist and peer
Until the fancy footwork became absolutely clear.
Now peering under ladies' skirts was considered very rude;
And some remarks the patrons made were verging on the lewd.
The private parts of a baby girl are called 'cucu' in France
And now this word was used to name this aspect of the dance!
So shorter skirts were made so all the patrons had a view
Of the pirouettes and other things that ballet dancers do!
But the shorter skirts were dignified with row on row of tulle
So that footwork plus decorum at last became the rule.
*
But the vulgar name persisted, as it does right to this day!
Though they changed it into 'tutu' .... a much purer word to say!
Who would think a such a pretty word would have such a sordid past!
(I hope my ballet dancing friends aren't looking too aghast!)
*
Posted by Rinkly Rimes at 6:28 AM