BRYANTICS
April 25th
The earlier part of the week was dominated by the Volcano Crisis. We were well out of it down here, but passengers suffered. The long arm of the news was evident in a strange way in our family. Rebecca, Brian and Blake are due to fly out to New Zealand on Monday, for three weeks, and Blake's School Principal was going to organise things. She, however, was stuck in London! So some forms may not have been filled-in! Only a small connection but it shows how far the results of something in Iceland spread!
Locally, our news has been full of a Rugby League scandal. Normally, anything to do with sport bores me witless (except for big events like the World Cup) but this has been quite an item. The leading club has been found guilty of cooking the books, and stripped of all its 2010 'wins', throwing the whole system into chaos. The team is called The Storm and they've certainly whipped one up! 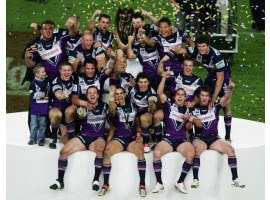 In Happier Days!
Greg and Michelle arrived home from Thailand (much to my relief) last weekend, but after my Diary had 'been put to bed' so here are a few shots for relations. 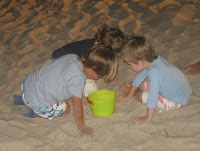 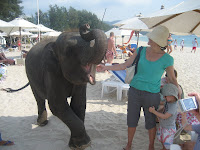 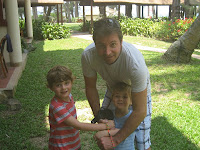 The Boys made Jewelery for Dad. 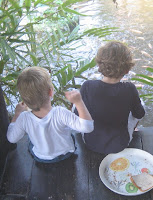 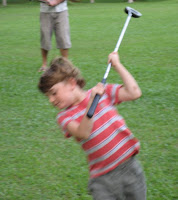 Harry tried his hand at Golf. 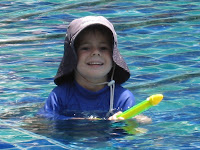 Max was persuaded into the water where he gave his hat a dunking! 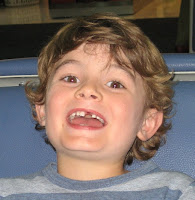 And Harry grew up!
Almost as soon as they got back here Harry started a new school! They're moving house in May and so he's going to a school nearer the new house. I thought this was an awful upheaval for a little boy but he took it all in his stride.So now he's in another uniform! 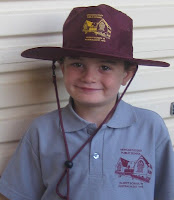 I hate these big-brimmed hats but they do a good job in Summer!
His new school is the oldest school in the whole of Australia and there are only 180 pupils. I liked the atmosphere when I collected him from there.
My own life was fairly quiet. One reason was the fact that I was supposed to travel down to the Central Coast by train on Tuesday, but dates were mixed up (either by me or my friend, Fran) and so I didn't get there. There was the usual Probus Committee Meeting on Monday, followed by Choir Practice, and then we had our Book Club Meeting on Tuesday night. We held it at Ann's place in the Wattigan Mountains so we expected it to be chilly, but this has been a mild Autumn (hot at times) so we were very comfortable. We discussed 'Shattered' by Michael Rowbotham which I found very gripping.

With Gwen and Gwenda
On Thursday Rebecca and I took Max out for the day.We decided to walk along the board walk at Redhead. The weather was superb, as it has been for weeks. 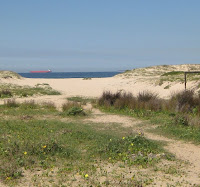 View from the Boardwalk
During the week we watched 'Tess of the D'Ubervilles' on TV. Although the story is so melodramatic it had a ring of truth because it was actually written at the time. And the actress who played Tess was ideally cast and acted wonderfully. The hero was a let-down though. When I read about Angel Clare in my youth I pictured him as an Adonis.

Angel and Tess
ANZAC Day tomorrow so I have to get up before dawn!
Till next week.
Brenda
Posted by Rinkly Rimes at 6:21 PM

First time here.
Yeah! The whole media was reporting about the Iceland ash and related issues..
in India we have the IPL.(Indian Premier League), a cricket event, which is now filled with controversy of match fixing and stuff.
*sigh
__

Thanks for a nice read.
You have a Happy weekend!

Hello! I just wanted to say you have a lovely and interesting blog. I look forward to reading more of it:) Vanessa:) www.vanessa-paris.com

Hi Brenda;) Interesting diary. Looks like the family had a wonderful holiday. Will you be watching World Cup Soccer in South Africa. Kick-off is less than 50 days away. We're staying in North Africa end July when it's all over. Have a wonderful week.

You do keep busy, Brenda. I admire the fact that you do so many things and still find time to enjoy your grandsons. They are cuties and I loved the photo of Max holding on to his mother in case that Elephant decided to get too near.