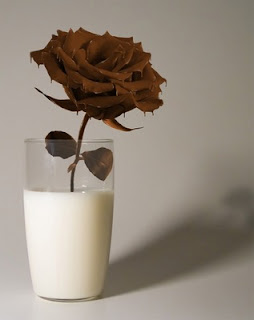 CHOCOLATE
A CINQUAIN.
Chocolate.
Deliciously brown.
Enticing, dripping, luxuriating.
Posing as a rose.
Confection.
*
What is a cinquain?
A cinquain is a short poem with 5 lines. The theme of the poem is a noun and the rest of it is written to describe that noun. This is the structure it follows: First Line: A noun that is the subject of the poem as well as the title. Second Line: Two words that describe the title/noun. Third Line: Three ‘ing’ words that also describe the noun. Fourth Line: A phrase with four words that relates to the noun. Fifth Line: A synonym for the noun in the first line.

My thanks to Marinela Reka of
http://marinelareka.com/
*
Would anyone be interested in my starting a CINQUAIN meme?
*
A very different approach to chocolate here:
http://rinklyrimes.blogspot.com/2009/09/way-too-milky.html
Posted by Rinkly Rimes at 6:23 PM

From a chocoholic: this is priceless!

wow... unexpected crazy gorgeous shot. Love the cinquain idea with it.... how about a 'cinquain shots' meme... or am i missing something thats already in action?!

I learned something new. I never knew what a cinquain was. Since yours was on my favorite treat, I enjoyed learning.

This is so fantastic !! Simply amazing !!