BRY ANTICS
18th April
My Sunday Diary has been non-existent for a few weeks. I deliberately didn't attempt it when we were living through the birthday/holiday/visitors period, but my reason for not writing it last week was quite different. I lost a years worth of computer-saved photographs (goodness knows how) and I really lost heart for a while. There didn't seem to be any point in trying to save memories, somehow. Not only that but Greg and his family have been over in Thailand for ten days, and the news from there has been so unsettling at times that I've felt unsettled too! Anyway, only moments ago I had a call from Sydney telling me they're all back safely and will see us soon. So I feel greatly relieved. I've made them a chicken/cheese/macaroni thingy for this-evening's meal, so I feel things will get back to normal quite quickly.

Fortunately the Bryants were in Phuket!
Of course, World News has gone on as usual! We were delighted to read about the nuclear diminution, of course. Australia has never had any nuclear armaments (wasn't it 'Dubya' who used to say 'nucular'?) but we have a lot of exportable uranium so I'm sure there will be a ban on that.

We only sent a Minister
However, I was reading this-morning about Obama's concerns re cyber-terrorism, and that sounds almost as bad! The Chinese earthquake has sounded dreadful, but I haven't heard that they've sought aid yet. The fact that we all help each other in times of trouble is very heartening.
China is connected to our main local news this week. A Chinese cargo ship took the wrong route through the Great Barrier Reef and became grounded. Oil was spilt and many Queensland beaches have been sullied.

Pollution!
We have also been affected by Iceland's volcanic plume, though not directly, of course. Hundreds of people are stranded at Sydney Airport. I'm wondering if it could be an on-going problem! I hope not!

Volcanic plume.
My own life has been predictable this week. But mention must be made of the weather! At this time of the year it is so perfect, most of the time, that we quite forget the summer's heat and the coming winter's chill! On Monday the Altos of our choir had an extra practice because Lois wanted to introduce new songs. We're only a small group and it was enjoyable. And on Wednesday it was Scrabble Day, which meant the usual friends coming to my place and behaving in a manner quite unbefitting elderly ladies! Then, on Thursday, we put on one of my 'casual' melodramas for a local Church group. The members were, many of them, very elderly and incapacitated, so we were dubious about getting them up to do their share, but we persuaded them, telling them that they could act sitting down! As you can see from the photo they all had a great time, although the love-scenes were rather difficult to stage! 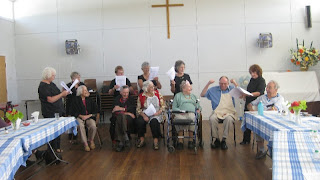 I was taking the photograph.
On Friday we had a great day. We all met at Carole's (our pianist) to record music for the rest of the year. Carole has to have an operation on her hand soon, so we wanted to record an alternative source of music. Afterwards we read through a new play of mine. It wasn't very well received and I could understand the criticisms and I'm going to rewrite it with a different emphasis. This I'll enjoy doing .Ours is a sort of Melodrama Co-operative! Then we had a pleasant lunch (we'd all brought a plate) and then did some more recording. All very tiring but great fun and well worthwhile. 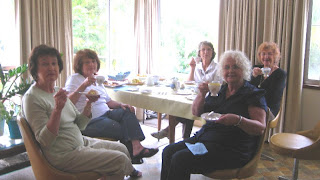 Here we have Carole, Betty, Loretta, Pam and Gwen. 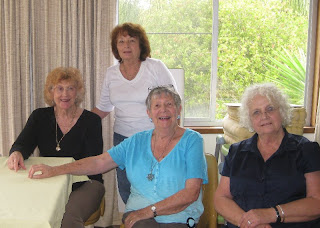 Note the colours of an Australian Autumn through the window..... green!


Maybe I'll have some photos of Greg's holiday to round this off! If not, they'll be included next week.
Till then,
Brenda.
P.S. They're back! 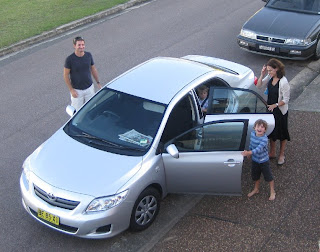 Hot Off the Press
'Hallo Grandma!' (I was on the balcony.)
Posted by Rinkly Rimes at 2:29 PM

So interesting to read about world news from the perspective of another country. Sorry to hear that the ash cloud has got as far as you and is disrupting travel.

Lovely post. Many bad things happened this week indeed, staring with the Polish tragedy and now this volcano, paralyzing the whole worldwide air traffic. What a lovely group of friends, you are so lucky to have them.
Have a nice weekend!

Hi Brenda;) I popped in and read your Sunday Diary to catch up with your life. Glad your family was safe; I LOVE the last photo. What love you all have for each other. We are back in Khartoum after a month of motorcycling around SA and about a week in total at home. Have a wonderful day. Jo