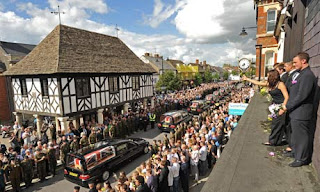 A small town in England.

They mentioned a by-pass once.

The people bemoaned the traffic.

The hearses of young people

Killed in a far-off war.

They were travelling from the airport.

First a few standing silently as the hearses moved through

When another body is expected.

The young, the old,

Everyone in Wootton Bassett

And the local cafe

Certainly not this way.

It has come to represent a nation.

"Then a single bell began to toll and the gentle buzz of conversation was replaced by the odd cough and the sound of a toddler. Another bell chimed to mark the hour and the cortege appeared.Men raised their hats. Soldiers saluted. People wiped away tears. Relatives and friends of those who had died threw flowers on to the hearses.Then, with a polite ripple of applause, the cortege moved on and the crowds started to disperse.Things started to return to normal in Wootton Bassett. Until the next time."