BRY ANTICS
November 29th
This has been a very full week, but I suppose things will accelerate right up to Christmas now. Here in the Southern Hemisphere we are in a different situation from all comparative societies, because the end of the year really IS the end of the year, in that it corresponds to an American or British mid-year. School ends and the long holidays correspond with Christmas. The New Year really IS new, with little children starting school etc. And, because of this we seem to get a double dose of parties etc. And all when the weather is steamy! I'm not complaining but......

Our local politics have become rather heated too. Malcolm Turnbull, the Opposition leader, wants to side with the Government on the matter of Climate Change, before Kevin goes to Copenhagen, but half Malcolm's party wants to hold back and his leadership is being threatened. Great angst all round. What thick hides politicians need to have!

On MONDAY Malcolm (Bryant) and I traveled down to the Central Coast to hear a friend's choir. During the course of the concert they performed one of my little plays so that was good for the ego!When they lined up at the end I also took a bow. 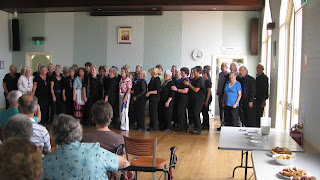 I'm the little blue person on the right.

On TUESDAY evening Malcolm and I were invited to dinner at a retirees' gathering, and I entertained with some of my sillier poems. I was delighted with this flattering picture of me in full flight!

Theatricals held sway on WEDNESDAY as well, but this time I wasn't involved. A group of us went down to Sydney too see the musical 'Wicked'. I usually just put-up with the two-hour journey, but it so happened that I found myself in a very congenial group both going and returning, and I reveled in the social chatter. The journeys passed in a flash. However I did NOT enjoy the show. While the singing, costumes, scenery, effects etc were great, I found the story tedious and inconsequential, and the music uninspiring.

THURSDAY was a much more relaxed day. Becca and I took Max to the beach as the weather was divine; not too hot, thank goodness! The Children's pool was being cleaned so we had to use the Ladies' pool , built in the mid 19th century to prevent the ladies seeing the naked men in the surf! 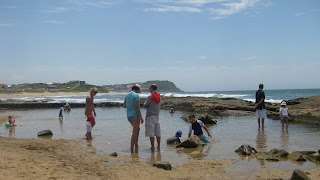 The Ladies' Pool.
FRIDAY became theatrical again, but not to any great extent. I wasn't happy with our last production of the 'Pirate' melodrama; things beyond our control threw us out of kilter. So we had an extra rehearsal at my house today and that was fun.
On SATURDAY I went to Marketown to do photocopying and I went very early to be sure of a parking spot.Sure enough, by the time I'd finished a little shopping the place was packed. I can't say the hectic nature of Christmas thrills me much. Becca came for the evening with Blake, as Brian was on Fireman duty down in Sydney. We had a low-key evening of pizza and a fairly so-so TV film, but it's always lovely to spend time in her company.

Brenda
Posted by Rinkly Rimes at 6:26 AM