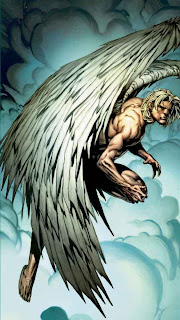 
asks us to write using as a jumping-off point the title of a Sarah McLouchlan song.
I've never heard the song but I'm pretty sure the composer didn't have this type of Angel in mind.

IN THE ARMS OF AN ANGEL


In Victorian times this title would make one yearn for the sky
Where the messengers of God would hover and watch us as they flew by.
When we thought of death we'd imagine being held in gentle arms
And taken above to Heaven, where nothing hurts nor harms.

Then 'angel' became a sweetheart, a cutie, a sweetie-pie,
Her wings were just a statement for she couldn't really fly.
She symbolised perfection of a very sexy kind.
Except for Church, the sentiments were simply left behind.

But then there came the 'X-Men', and a different type emerged!
The heavenly and the sexy were in fantasy submerged.
Below you'll find a description! It beggars all belief!
I don't think he wants me in his arms! Thank goodness! That's a relief!

Angel is the an X-men who can fly by means of natural wings, which span 16 feet from tip to tip. Archangel's entire anatomy is adapted for flight: His bones are hollow like a bird's, his body is virtually devoid of fat, he possesses greater proportionate muscle strength than a normal human, his eyes can withstand high-speed winds, and a special membrane in his respiratory system allows him to extract oxygen from the air at extreme velocities and altitudes. As he scales the skies he helps those in need.He is a loner, he doesn't spend muchtime with the X-men but comes when called.


Another type of angel here:

interesting view..i could have never thought of it this way..

funny and quirky. I liked it