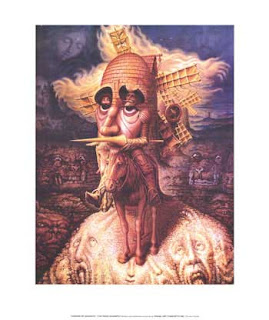 Octavio Ocampo
When I published a mystery illustration the other day some people were interested. So here's something similar; a double version of the famous Don Quixote. See his features, see him on his donkey and see the windmill! What a fascinating piece of work! We've even got Sancho!
MEME EXPRESS
http://memeexpress.blogspot.com/2009/06/d-day.html
suggested some entries to commemorate 'D' Day.
My only link with WW2 is the Don's warlike attitude, I'm afraid!
DOUBLE DON!
Don Quixote doubled! Don multiplied by two!
All that dashing,
All that slashing
And his donkey too!
One of him was quite enough! The windmills felt unsure
When he dabbled
When he scrabbled
When he gave a roar!
Don Quixote doubled! What a cross to bear!
Great devotion
And emotion!
Don and his double-dare!
I could never cope with him, when he was only one!
Quixote double?
Too much trouble!
A duo's overdone!
Another battle-cry here:
http://rinklyrimes.blogspot.com/2008/12/222-tootle-rock.html
Posted by Rinkly Rimes at 4:35 PM