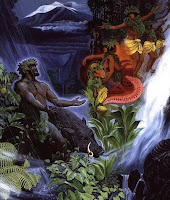 EVERY PHOTO TELLS A STORY
http://everyphototellsastory.blogspot.com/2009/06/image-prompt-sprout.html
displays a painting and the word
'SPROUT'

In this folk tale a godsend sprouts from a disaster.


The greatest storm since the world began,
Frightening every mortal man,
Reached one dreadful night.
Lightning had never been so bright.
There had never been such loud thunder!
All Hawaiians were filled with wonder.
The storm erupted, long and loud
From a great enveloping purple cloud.
And when it was over, the great god Ku,
Was walking among them, and no-one knew.
He had come from the skies in the mighty storm
And now he would take on human form.
When people saw a stranger there,
With a tall tanned body and thick black hair,
They realised he was  very fine
But they never guessed he was divine.
With his big strong hands he planted crops;
He easily climbed the mountain tops,
He worked all day with the strength of ten.
He was certainly not like other men.
The girls of lost their hearts
To this stranger who'd come from distant parts.
But Ku had chosen his future wife
And, together, they started their married life.
Years passed and a terrible famine arrived!
Scarcely one single Hawaiian survived.
People were starving out in the street,
For the crops had failed; there was nothing to eat.
Ku's own children were thin and weak;
They could hardly move, they could hardly speak.
Now Ku was unable to tell his wife,
The one who had loved him more than life,
That he was a god from up on high,
So he looked in her eyes and just said 'Goodbye'
Do not cry for me, do not grieve.
I can only say that I have to leave.
Way way down in the earth below!'
And she replied 'You have my trust.
You will only go if you really must.'
Then, right there, before her eyes,
Her husband, a great god in disguise,
Sank through the ground and was suddenly gone,
Nothing remained to gaze upon.
His wife then knew that he had a plan
And he never had been a mortal man.
She sat and wept  with a mournful sound
And her tears soon soaked the soil around.
And, as she wept, a bright shoot grew
Sprouting up all green and new.
And, bit by bit, a breadfruit tree
Grew up and up for all to see.
And the people cried 'A breadfruit's growing!
See how all the shoots are showing!'
And they grabbed the shoots take away
But they heard a voice from the ether say
'If you plunder this breadfruit tree
The way you act will anger me.
I'll disappear, in the blink of an eye
And you will all be left to die!
But, if you wait till I'm fully grown,
You can all have shoots of your very own.'
And the people knew that a god was speaking,
Bringing the food they had been seeking.
They fell down and showed him their gratitude
For all the abundance of breadfruit food.
And the one tree prospered, and more beside,
And breadfruit spread over the countryside.
And the people were happy because they knew
That this was the gift from the great god Ku.
A different sort of gardening magic here:
http://rinklyrimes.blogspot.com/2008/09/116-miss-robbyes-hobby.html
Posted by Rinkly Rimes at 6:21 PM

sometimes you make us look like a child.... only when the poem was over I realised that I was keeping my mouth open in awe :)))