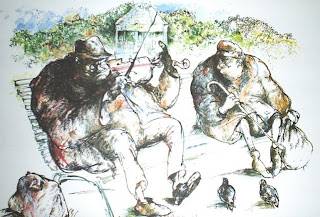 One quick glance and you will see
Pathetic tragi-comedy.
Two homeless folk, both past their best,
Sitting on a seat to rest.
She is grossly over-weight,
Never mind! So is her mate!
Footwear looking pretty thin!
What a decrepit state they're in!
Double-chins seem de rigeur;
One for him and one for her.
Their lumpy bags! They look a mess.
Is that all that they possess?
Quickly turn your head away!
We don't want them in our lives today!
But wait! Forget the state they're in!
Did you miss the violin?
Let us build a little story
Around their days of Morning Glory.
They met at school. First love was bliss.
They both remember that first kiss.
But they met others; they lost touch.
It didn't matter very much.
He became a poor musician;
She found work as a beautician.
He didn't marry, but she did,
Growing fatter with every kid!
Life was never milk and honey;
Neither were blessed with any money.
Down they spiralled as life went by;
Sometimes all they did was cry.
Her children all moved far away;
She grew more fat, she grew more grey.
What did the future have in store?
It didn't matter any more.
Life was a game they couldn't win.
But his treasured possession was his violin.
One day, in the park, he sat to play,
A well-known tune from a far-off day.
A portly lady sitting near
Recognised something she used to hear.
'I remember that song from when I was young;
Everywhere, everywhere it was sung'
She said, quite shyly, with a smile.
Then listened to him play awhile.
She stood to go, with no time for more.
He said 'I've seen you somewhere before!'
And then it happened! The flood-gates burst!
They fell in love just like at first!
We wont intrude on their recollections.
Such things don't call for close inspections.
Let's just say there was lots of laughter
And a bit of 'happily ever after'.
So, if some downward days begin,
Hang on to your violin!
*
Posted by Rinkly Rimes at 1:40 AM