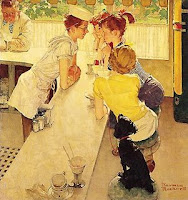 Norman Rockwell
Another pictorial prompt from SIMPLY SNICKERS!
MILK-BAR MOMENT!
All eyes are fixed on Love's Young Dream,
But things are not the way they seem!
As the 'soda jerker' (1950),
Admires the girls (and they're pretty nifty!)
Another drama is taking place,
Another response to a pretty face!
Those Bobby Soxers, with pony-tails,
Without much experience of males,
Are giggling, posing, pert and pretty,
Humming, I guess, the latest ditty,
Thinking the world revolves about them;
Thinking life would be dull without them.
Mother, who's keeping a watchful eye,
Wishing her girls were a little more shy,
Is hanging on to the family pet,
Feeling a faint tinge of regret;
Wishing that she were still thirteen
And lovely as she once had been.
This-morning the Man of the House was cross,
Declaring there only could be one Boss!
Shouting that Mother must toe the line!
'I'm Head of this Household! That's my job! Mine!
I'll bring home the money! You do the rest!
Clean the house! That's what you do best!
Look after the girls and cook the food!
And try to snap out of your silly mood!
Fancy saying you suffer neglect!
You're a married woman! What do you expect!'
But there, sitting over to the side,
Is someone who will boost her pride.
He's not a Romeo, that's true,
But in Mother's case, anyone will do!
He's smitten, he's blushing, he rolls his eyes,
His is a case to romanticise.
Soon his eyes with Mother's will lock!
That will give her quite a shock!
She'll find herself basking in admiration!
Who cares about his motivation!
All mother needed to boost her morale,
Was to feel once more like a femme fatal!
She's no thought of divorce or a 'bit on the side'.
She meant the vows she took as a bride.
But 'I'm still in the game' I know she's feeling!
As for him, well, his heart is  reeling!
From such encounters comfort springs.
Mother walks home as though on wings!
Posted by Rinkly Rimes at 9:55 AM

So cleverly written! This was a pleasure to read...thank you for sharing. :~)

Oh my. I loved this. So descriptive and luscious in details from the observation of her children to her own life - what's behind the Norman Rockwell life. This reminded me a bit of Revolutionary Road.

This is quite a read..fun- The music too

How cool that you created an entire poetic story from the artwork.

How well captured a day-dream of a motherly lady :))))

It all starts with...

I'll bring home the money! You do the rest!
Clean the house! That's what you do best!
Look after the girls and cook the food!
And try to snap out of your silly mood!
Fancy saying you suffer neglect!
You're a married woman! What do you expect!'