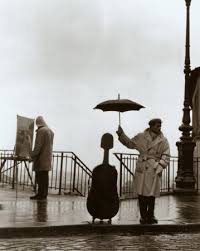 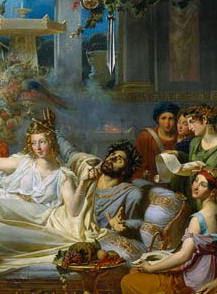 DAMOCLES AND THE SWORD
Dionysius, the king, (whose name also starts with D!)
Was a rich and cruel tyrant way, way back in history.
He lived a life of splendour, as was usual with a King,
And, as you might imagine, he did not want for a thing!
Damocles was a subject who liked to fawn and flatter,
Concerning every aspect of the King's life, every matter.
'Oh King!' he'd say 'How mighty and how wonderful thou art!
How glorious and noble both in intellect and heart!
And how richly do you live up there upon your golden throne!
If only I had a little of the plenitude you own!'
Your virgins and your handmaids! Your servants waiting by!
The whole world envies you, my lord, but none so more than I!'
As on and on and on he went and the King began to fume.
He stood up in his majesty and then addressed the room.
'Set this man up as a King! Give him everything he wishes!
Feed him the best venison on gold and silver dishes!
Dress him in silk and velvet! Give him handmaids by the score!
Treat him as you would treat me, even though he's only poor!
Set him high upon a throne and bow and scrape before him!
Obey his every slightest wish and do your utmost for him!'
So Damocles was set-up as an equal to the king;
He couldn't believe his luck, of course; he revelled in everything!
'And now......look up!' the King commanded, 'Look above your head!
Look at what is dangling, merely held there by a thread!'
Damocles then looked above and there was a shining sword!
And he saw an evil smile upon the features of his lord!
'How do you enjoy your luxury?'  Dionysius said then.
'I'm certain you'd be happier as the basest of all men!'
'Indeed I would' yelled Damocles, and he rushed into the night!
That sword, held by the slimmest thread, had given him a fright.
*
And so it is, when things go well, we always have a fear
That something awful may occur, this week, this month, this year.
And we quote 'The Sword of Damocles' to explain the way we feel.
A sense of threat, imaginary, or maybe, all too real!
*
Posted by Rinkly Rimes at 10:00 AM

Ha! Isn't that the truth, about rain.

Love the rain poem, Brenda, and the photo.
— K

aaah, you captured the feelings on rain! Well Done~ Great photo, reminds me of my post(kind of) ;D

Absolutely love the rain poem! Sounds very much like a magic chant... Perhaps we should all try chanting it together? Brilliant!

Don't we all want rain to be just so? Enlightening perspective on rain.