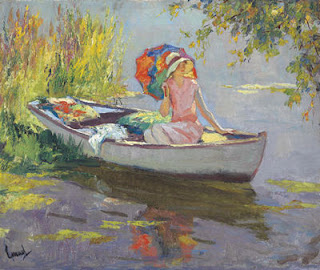 PINK.
At last Paul Smith has asked me out! We're going out tomorrow!
He says a friend has got a punt, which we are going to borrow!
I thought this day would never come! I've longed for him so madly!
I don't like rivers very much but, for him, I'll suffer gladly!
A girl must play her cards just right, if she wants to get her man,
So now's the time for me to sit and calm myself and plan!
I'll take my parasol, of course, for I want to act the lady,
And I'll look quite sort of vulnerable, when the light is shady.
But a hat as well, I'm inclined to think, incase my hair gets mussed,
I'd hate to face a wayward breeze, or, worse, a violent gust!
Stockings? Of course, the white ones; they make me look so pure.
(He guesses I'm a virgin, but white will make him sure!)
Gloves? Now there's a problem; I want to look my best,
But I'm aiming for a girlish look; don't want to be overdressed!
So now, the dress! The blue? Too old; I've had it since last year.
The grey? Too dowdy. Well, the green? The green is torn, I fear.
The yellow gingham has a neckline he might think too low,
And the flowered cotton's childish; I want my dress to flow.
I want him to notice I have ..... curves, those things I mustn't mention.
And a dress that flows might show them off...... though that's not my intention!

Yes, that's the one! It highlights my complexion.
He'll see that I'm attractive when he looks in my direction!
Pink brings colour to my cheeks (though some rouge will help as well)
Gentlemen don't like make-up but he will never tell!
Oh how he'll love my dainty look! My girlish parted lips!
The way my pink dress clings to me! My pearly finger-tips!
He'll love my skin, my walk, my voice, but, most of all, my clothes!
I'm certain as a girl can be that Paul Smith will propose!
*
Why has he left me sitting here, dejected, on my own?
I thought he was a gentleman but here I am, alone!
All I said was ' I like punts; punting is so romantic.'
All I did was giggle and say 'Let's punt the Atlantic!'
All I said was 'Don't splash me!' and 'Oh what horrid flies!'
All I did was get frightened and let out some girlish cries!
Well, the water looked so murky and the punt, well, it was rocking!
But why on earth did he say those words that were absolutely shocking?
I asked if he liked my perfume; the look he gave was blank.
And then he pulled in to the shore and tied up to the river bank!
He says he's gone off for a walk; he says he'll be back later.
It seems to me quite possible he may be a woman-hater!
*
I think I chose the wrong dress! I should never have picked the pink.
If he asks me out again I'll wear the green, I think.
Posted by Rinkly Rimes at 9:50 PM

This is pure delight to me!
So, perfect too for my meme.
As you may well be aware my home is in Dreamingspires, where punting along the river is must.

Have linked your fine contribution to my post.
TY for playing again.
Best wishes
Blue

I love this poem of the vain girl with a lack of sensitiveness. It seems to fit the painting perfectly.

What a wonderful way to express pink. Beautifully written!

And all these years men were under the impression that they had wooed and won the hands of pretty ladies..!!!! :)))))

Great big smiles on this one!!!

ha. i am sure it had everything to do with the dress...lol. wonderful take on pink...happy tt!

I chuckled all the way through. I love tongue in cheek, especially one featuring pink. Happy TT.

This is just a delight. So well done! And my opinion is that he was just a jerk, and she's better off without him!

My post for Pink, close to my heart, is up here.