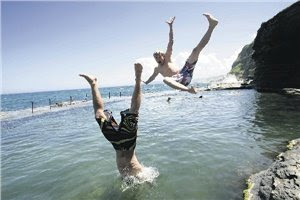 From our local paper this week.
SUNDAYS IN MY CITY
http://www.unknownmami.com/2010/02/sundays-in-my-city_13.html?utm_source=feedburner&utm_medium=feed&utm_campaign=Feed%3A+UnknownMami+%28Unknown+Mami%29

Today we'd call this man a jerk!
A really nasty piece of work!
A soldier with a very cruel mentality.
His victims came here on a cruise
(Without the parties and the booze)
And all they found was dastardly brutality.
His name was Major Morisset,
A name remembered even yet,
And they were Convicts mired up in his jails.
In Newcastle he had his way.
Cursed were those who had to stay
Under his thumb in old-time New South Wales.
One day, while strolling by the sea
He thought 'It would be good for me
To have a private pool that I could use.
These waves are rather high and rough
They're just not quiet and calm enough.
A pool cut in the rocks, that's what I'd choose.'
So he chose a platform made of stone
Where he could bathe and swim alone,
And the convicts came with axes and with picks.
In a line he made them stand,
With implements that came to hand,
Some made for hoeing ground or cutting bricks.
The rocks were hard, the men were weak,
And feeble was their whole technique;
But Major Morisset brooked no denial.
He had men whipped when they were slow;
The hole began to spread and grow,
He saw that he would soon relax in style.
And now we see this crystal pool
Looking inviting, deep and cool,
And we view it as a touristy attraction.
Forgetting that men toiled and bled,
And many of them dropped down dead,
Just to give one tyrant satisfaction.
It's known now as The Bogey Hole
Memorial to many a soul
Who suffered under Major Morisset.
Those convicts live in memory
Here, in our city by the sea.
We owe them all a deep and lasting debt.
Posted by Rinkly Rimes at 9:45 PM

Fun picture :) And B also for Brenda Bryant ;)

Fascinating. This is a terrific way to learn a bit of history. I love learning all this information.

Amazing how there's always some poor body to carry out the elites' commands even though the elite is surely no 'blueblood'. Great narrative poem!

Now this is different from any other post I have seen..loved this...

Fun photo! Have a nice abc!

Everyone's past has some skeletons rattling around in it...The important thing is what a person is today, and that we learn from our mistakes in the past. The US has its share of tragic mistakes.

Love the photo today; here in the US we are quite the opposite--very cold and covered with snow:)

I love your picture. SO brilliant : ). It speaks to joy and happiness! Love it!

This is a fine and different ABC - good choice!

I'm also here on behalf of the ABC Team to thank you for posting.

Great shot from the paper. Such a colorful history :0)

Very interesting, have a wonderful Sunday.

Thank you for sharing your city and its history.

Fun picture of SUMMER! We could use a little of that this way!

What a fun picture this is!! I could really go for some sun and water right about now!

Looks like a warm and wonderful day in your city. thanks for sharing.

Love the look of summer!

I would have no idea without your poem that there is such sadness behind the beauty.