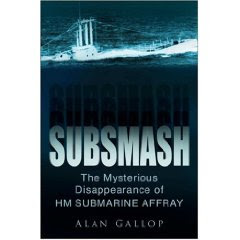 ABC WEDNESDAY
is off and running again and I'm delighted! Letter 'A' of course!


There is a certain amount of embarrassment associated with this poem. I was at Teachers' College in 1951, when the Submarine 'Affray' was lost. It was an enormous tragedy at the time. We had been discussing narrative poetry in my English class, as well as having read 'The Ancient Mariner' and I decided to try my hand at an epic poem. If you read it you will realise that it is fanciful. When I showed it to my English lecturer she was appalled! How dare I trivialise such a dreadful event! She really chastised me and made me feel dreadful. So the poem never saw the light of day. Looking back, of course, I realise that she was quite right. However, as a little footnote to history  I feel I dare print it now, fifty-seven years later.
I have copied a prose account below the poem. The 'odd events' were certainly odd!
AFFRAY

It fell in upon an April day
That out into the channel went the submarine 'Affray'.
Her back was shining like a seal's and strong and thick besides.
and fifteen mariners were locked within its sides.
'Go up into my conning-tower! Look out and spy the land,
For we must surely plunge below when ten leagues from the strand.'
Thus spoke the captain heartily; the engine throbbed and sang;
The galley and the engine rooms with merry voices rang.
'Oh sir! I see some land ahead and it will soon be night!'
'Surely!' the Captain answered him, 'It is the .
'Oh sir! I see an albatross! An omen I have heard!
'Surely!' the Captain answered him; 'A foolish sort of bird.'
'Oh sir! I fear we all must die! I fear some dreadful fate!'
'Surely we dive! the Captain said 'And we surface again at eight.
Go up into my conning-tower! Look out and spy the land
For we are going to go below exactly as we planned.'
The night was dark, the moon but new, the sea on every hand,
When the Captain gave the order 'Dive! We are ten leagues from the land!'
Oh hearty, hearty was the crew, three score and fifteen men.
Oh little, little thought the crew they would never rise again.
'Oh I've a maid in town and for me I know she'll wait
Until the time that duty's done and we rise again at eight.'
The sea closed over the 'Affray' and the crew was full of hope
For they saw the sea was calm as glass from the little periscope.
'Go up and look through my periscope! See if other vessels pass.
If our luck holds good we shall rise at eight, for the sea is calm as glass.'
'Oh sir! The sea is smooth and black and the moon is round and white.'
'Surely!' the Captain answered him. 'We're in for an easy night.'
'But sir I see an albatross upon our periscope!
It's eye is looking back at me! I fear there is no hope!'
'Surely' the Captain answered him, 'A bird is but a bird.
Forget the childish fairy tales you foolishly have heard.
But since your heart is full of dread I'll respect your foolish whim.
If we dive down deep he will fly away and we'll be rid of him.
Pull in, pull in your periscope! We will dive six fathoms more
And be rid of yonder albatross, which seamen feared of yore.'
The black sea closed on the 'Affray' and the moon shone large and white
And the landsmen slept in their cosy beds on the shores of the .
For all your ships, your radar sets, your aeroplanes and men
The lovely submarine 'Affray' will  never be seen again.
Posted by Rinkly Rimes at 1:46 AM

Wow! I think your teacher deserves an 'F' for not recognizing a poem that captured the drama of the event.

I didn't know about the Afray. I doubt that it received much news in the U. S.

I lost a boyfriend in a submarine in WWII. As far as I know he is still listed as 'missing in action.' When this is posted for a sailor in a Sub, you know what this means.

Since ghosts don't exist, I' not afraid...

PS The anticlimax was the reference to round four - I have cleared that bit. Thank you for pointing it out.

Well, you learn something every day! All this passed way over my then 10yr old head, but my 67yr old ditto finds it facinating.

Teacher college! So cool! I knew you had to be a teacher. You are so creative and fun!

It was a tragic events, but you wrote well in your poem.

I had never head about the Affray, so this was a very interesting history lesson.

Thanks for visiting my blog. About the secret of the plane wheels photo - it's a 50 seat prop plane with the wings joined at the top of the plane so the fuselage blocks the views out the windows. When the wheels engage before landing, you can't see much else.

I have never heard the story of the Affray before--that is very interesting.

I really enjoyed your poem and agree with Darlene, that it captures the drama well. Maybe if I had lived through the drama in England at that time I would find the poem more offensive.. but I really hope not.

I would have been excited if I had a student like you were. The poem is great even if it's written in easy way. It could be used for a ballad.

I love your poem and the story about this mysterious disappearance. And you're right, visiting all these blogs from all over the world, all these different people, beautiful photos and stories and really funny stories. I'm hooked!

I had never heard about this drama.
According to me, there was no reason for you to be
....ashamed by your poem !You were a talented pupil !
Thanks for your kind comment .

I had never heard of the AFfray....good choice for ABC!

this is a great A post! I'm glad you had the courage to print your poem. Your poem is a part of history in its own unguarded way as a youth from that time, & I find that interesting.

Can understand the English Teacher's panic when little Brenda marched in with her poem.