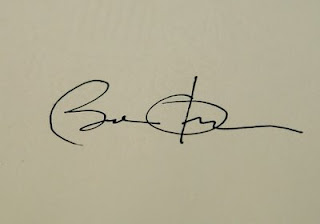 When my children were small and I was housebound, I studied graphology, the interpretation of handwriting. At the start I thought it might be mumbo-jumbo, but experience proved otherwise. Sometimes results were quite uncanny! The following analysis is taken from the opinion of experts, though, as it is many decades since I practised the craft and I would not consider myself reliable at this stage.
SIGNATURE TUNE.

Barack Obama's signature is large and bold and free,
A sign that he likes to be noticed at the very top of the tree.
The final strokes in both the names move swiftly to the right,
The sign of a forward-thinker with the future well in sight.
The handwriting is picturesque, colourful and charming,
Here is the sign of someone both vivid and disarming.
His small letters are small indeed, showing powers of concentration;
If he sets himself to work  he brooks no deviation.
The signature has no definite shape; he may sometimes change his mind.
The writing of the versatile is often wavy-lined.
Note the absence of beginning strokes; this means that his attack
Is often without preamble, and with no looking back.
The 'a' is open at the top, indicating verbal skill,
The writing of an orator, with the power to thrill.
The 'O' that starts his family name is smaller than the 'B'.
This means his personality means more than his family tree.
The line of the 'b' cuts through the 'O', cutting his life in two,
Maybe the old and 'African' life and the life that now is new.
The fact that the writing is tricky to read means privacy is desired
By this very, very public man by such ambition fired!
The slant of the signature indicates a reliable sort of man.
All in all a person who will do the best he can.
Posted by Rinkly Rimes at 1:06 AM

Goodness gracious me! Another area of interest we have in common - will they never end?

Graphology,Astrology
and writing zany rymes
strikes me we've been having
the very best of times!

I think there's a lot in graphology. It's one of the subjects I bought a book on but never got around to reading.

What a very interesting interpretation. I love it! And you poem is lovely, as always, lovely and informative. Thanks for a great post!

I hope that your interpretation is right!

Aha..... Looking at the signature and before reading the poem, I thought it's your signature....

the poem sort of fits your personality too :))))