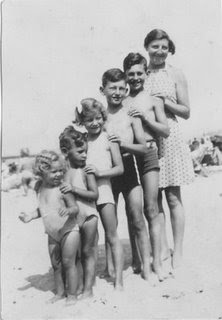 (Richard! There are more photos on my PLUS blog, reached from this page.)

On the 11th March I published a poem about my Auntie Vi. Her son (known to me as Richard though he now answers to 'Dick') responded with the verses to be found below. He refers to an old photo, which I now publish. Sadly, Richard and I (second and third from the left) are the only members of this group still alive. Paul, Richard's brother, was yet to be born; he's still living. The reference to a 'favourite cousin' refers to a weakness I had, as a child, of telling all my cousins, each one privately, that they were my 'favourite'. What a sneak! It didn't get me anywhere! Anyway, now Richard has written in verse I gather that the urge to rhyme comes from the Hogbens, the line we share.
FROM RICHARD.

REPLY!
He was always bold! But he's grown bolder!
Fancy using the dread word 'older'!
As you'd have known, if you had seen us,
There weren't a lot of months between us!
Though he send me verses by the dozen,
He'll never be 'my favourite cousin!'
Rinkly
RICHARD'S RHYME
I have an older cousin , Brenda.
I thought, one day,' I know, I’ll send ’er
A wrinkly rhyme she’s never thought  ’f,'
Though come to think of it she ought ’ve;
How once we stood in ordered line
And watched the birdie – ‘Yes that’s fine!’
Result: a little family group
Of cousins, looking cock-a-hoop.
But think how Father Time, with sickle,
Has weaved his spell, with magic, fickle;
While those of us on Earth, (not under),
Can sit at processer, and wonder
Just how on Earth we have the time
To blog and dream up wrinkly rhyme.
But p’raps it is in ways as such,
It happens that we keep in touch;
And so in moments such as these,
Reach out to the antipodes.
And thus we manage to contrive,
Our memories to keep alive;
Before they up and join the race
That disappears them into Space.
Posted by Rinkly Rimes at 12:34 PM

Wow it runs in the family! He knows to rhyme as well! I enjoyed reading his rhyme and your answer!

It's a beautiful photo, perfect order as Richard says. Sad you two are all that's left of the group.

Blood for blood
Eye for eye
Poem for poem..!!!!