An Allegory of Painting 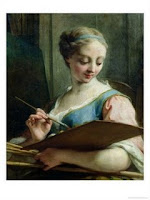 
(Author on holiday and unable to respond to comments.)
SIMPLY SNICKERS has given us an 'allegorical' picture to discuss this weekend.The picture is called
'The Allegory of Painting.'
My Dictionary says 'Allegory is a form of extended metaphor, in which objects, persons, and actions in a narrative, are equated with the meanings that lie outside the narrative itself. The underlying meaning has moral, social, religious, or political significance.'
I can't equate this description with this picture, I'm afraid!
ALLEGORY?


Don't you think an allegory
Should really tell a sort of story,
And fill the canvas with some great ideas?
This is nice but it's a pity
That it looks so pretty-pretty!
It's just a little portrait it appears! 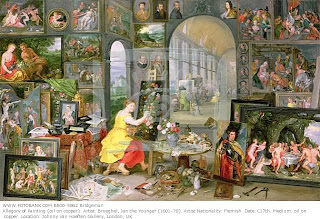 Breughel.
This one has the self-same title,
But it's oh so wild and vital!
It's depicting art in such variety!
Everything is overflowing,
Moving, leaping, loving, growing,
Echoing the artist's own society. 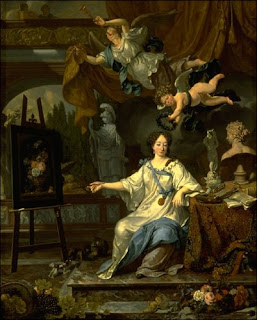 van Musscher
Here's another! Unrestricted;
All the artist's thoughts depicted;
Posed, but with an eloquence and verve.
Angels, Romans, swooping, flying,
All romantic features vying
To produce the most artistic curve. 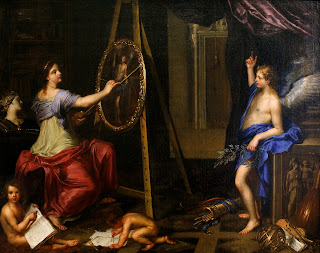 du Fresnoy
The nude form plays a special part
In this allegory of art.
See the boyish model, hand held high.
Little children creep and caper
Making their own marks on paper!
Soon the boy will spread his wings and fly. 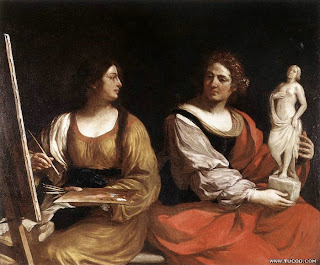 Guercino
And, even here, though the location
Doesn't fire imagination,
And the girls are not inclined to smile,
There's a certain hidden meaning
Which the viewer may be gleaning,
If he sits and studies for a while. 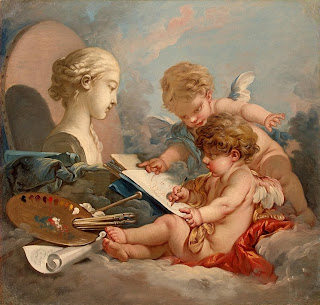 Boucher
Finally the cherubs enter
With a drawing at the centre;
Lots of dimpled flesh and baby wings.
This is a dainty allegory;
Nothing brutal, harsh or gory.
But at least it hints of other things.
*
But, let's return to Jean Restout!
I must say, in my honest view
He really cannot say he tells a story.
His girl is, doubtless, very sweet
But his art is incomplete,
Because it can't be called an allegory.
Posted by Rinkly Rimes at 7:47 PM

Monalisa's smile had made people ecstatic...

And Jean Restout's girl too has such a sweet smile...

I don't know about the allegory part..
But seeing her picture
I feel 'ecstatic' :)))