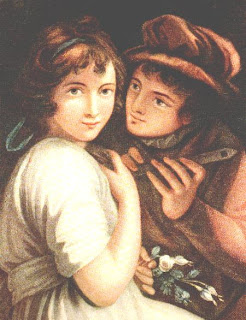 I read this legend on another  Blog, and I found it so interesting and sweet that I decided to write my own simplified version of the story. If the originator will contact me I'll acknowledge her.

To the Elizabethan age.

Think of the famous gentlemen

Strutting upon the stage.

Raleigh and Drake were two of them,

Fighting their battles on the sea

As heroes had done before.

Then bring to mind a lesser man,

Not written large by fame,

Thomas Ferris was his name.

Deep in the countryside.

Is a place that's known as Glaisdale

Where this young man wooed his bride.

Past meadow, lane and tree,

Till it reached the coast at

And flowed away to sea.

They kissed as they walked by the water,

Though he was a humble farmers lad

And she was a rich man's daughter.

They met in secret many times,

And their love grew ever stronger.

At last, though the outcome seemed quite plain,

Tom could hide his love no longer.

'Sir' he said to the rich man,

'Please give me your daughter's hand.

My love for her overwhelms me,

Though I've neither money nor land.'

Her Father said 'You've no money!

And she's of noble birth!

You come here as a beggar,

A man of little worth.

Leave my house this instant

My daughter will never be yours!

She can only marry  a rich man!

Thomas made up his mind to be worthy

Of the girl that his heart so desired.

He enlisted in the navy

And with ardent ambition was fired.

'We'll meet by the river one last time'

He said to the love of his life.

'Then wait for me, Agnes, my sweet one.

I'll return to make you my wife.'

To meet Agnes, Tom came to the river,

But great rains filled the Esk to the brim.

He could not get over to meet her;

She could not get over to him.

He longed for one last time to hold her,

But all he could do was cry out

'I'll return as a rich man, my lovely!

The suitors beat pathways to Agnes,

She spurned every man she espied.

Her father was full of resentment

But she yearned to be Thomas' bride.

In he soon turned to trade

And when he returned four years later,

It was clear that his fortune was made.

Thomas and Agnes were married,

And for twenty-six years they were wed,

Till Agnes took sick with a fever

And peacefully died in her bed.

Then Thomas remembered their parting

On that wild stormy night long before,

When the flood-waters kept him from Agnes,

Before he set off for the war.

'No other young lovers must suffer

As Agnes and I did back then.

I'll build a bridge over the river,

So that never will happen again.'

And today the quaint bridge is still standing

It's been that way right from the start.

The Beggar's Bridge built for all lovers,

Who cannot bear being apart.

What a lovely love poem Brenda. Was overwhelmed reading it. Searched and saw in the web a photo of that stone arch bridge.

In love, bridges are required..!!!