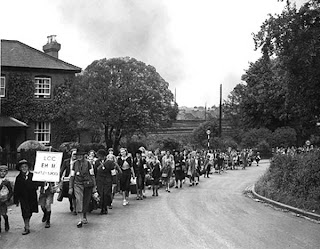 The Evacuation from Dunkirk in WW2 was certainly considered a miracle. It was a defeat, but thousands of soldiers stranded on French beaches were brought back to England by small boats, many of them pleasure-craft. Margate, in the South East corner of England, was where I was born. And it was an important landing-place for the soldiers who had been evacuated from Dunkirk. Shortly after their arrival we were sent, like parcels, into the country. This is a child's-eyes view of tempestuous times.

They arrived in Margate Harbour,
In dribs and drabs.
Young men,
Though they seemed to me to be old.
*
I remember, in particular,
Two, climbing from a rowing-boat.
Soldiers.
Tin helmets,
Slings, bandages, a little blood.
*
I was on my way home from school,
As I recall.
There was nothing frightening or dramatic
About their arrival
From Dunkirk;
The exciting thing was the chocolate.
*
Soon came the evacuation.
Houses boarded up.
Furniture packed away
'For the duration'.
Children, and I was one of them,
Buttoned into winter coats on a summer's day,
Labeled,
Suitably supplied with gas-masks
In boxes slung around their necks.
(Gas-masks were fun;
One could make rude noises through them.)
There was nothing frightening or dramatic
About being sent to the country.
The exciting thing was the chocolate.
*
All the trains were running in one direction only,
Away from the coast.
A train full of children ran alongside
A train full of returning soldiers.
We would pass each other time and again
As we halted in stations,
Or merely stopped in our tracks.
'Here they come!'
We'd shout!
*
In through the window
Would fly bags of boiled sweets,
Biscuits, fruit,
All donated by kindly souls
To 'the brave boys'.
It was thrilling!
It was War!
And the exciting thing was the chocolate!
*
Posted by Rinkly Rimes at 8:22 PM

What a great piece which gives the reader a totally different view, through the eyes of children. BJ

CHOLCOLATE then GUM: "Got any gum chum" was the instant chorus when sighting an American soldier on the streets in Margate! Americans arrived in Margate, en route to unknown destination, to save the Brits! No wonder your *mother, Brenda (*Plus pic LAST PHOTO - Mother) chose the area between the Clocktower and the Harbour to sell her poppies on Remembrance days.
I did not know that you were born in Margate! But,I guess, that is another poem in itself to come? Anonymous

Focusing on the chocolate really makes this poem! So well-written!

Oh how English Memory!
My mum wasn't evacuated but told the most incredible stories of the war!
Thanks so much.
Dxx

This poem is wonderful - but your cicada poem is over the top! (Can't comment on that one for some reason.)
Thanks for the visit, and I've already bookmarked your blog.

It was thrilling, it was the war! Great words. I am sure the whole thing was quite an adventure to children unaware of the true gravity of the situation. To team it with a bit of Glemn Miller just made an excellent post a brilliant one.

When you hit the poignancy button you hit it very well. Perhaps more chocolate for children would mean fewer wars!

Thanks for stopping in at SIMPLY SNICKERS again this week. Next week's prompt is up! Hope you will join us!

Welcome to Sunday Scribblings! I hope you have plenty of chocolate in your life now. A dear friend was evacuated to relatives here in Ireland during the war, and later returned to live here as an adult.

I was a university student at the time of Dunkirk, and, while I remember it only from radio broadcasts and newsreels, it made a tremendous impression on me. Heroic rescues always do.

Your poem captures a feeling of strangeness (and probably loneliness) and tedium that is subdued to good effect to the refrain of "chocolate".

Love this poem! It certainly gives an insight to those times that many have not experienced.

You did a great job of evoking your child's eye view of the world. It seemed so real and so recent. I think the lack of fear is part of the resiliency of children.

You've captured some historical moment... with soldiers returning from war. Somehow wars are sad events - and whatever could be result, when one's own returns a heroic and warm welcome is surely given.

It was nice to read the war heros and chocloates threaded together.

really a brilliant write...the view through the eyes of a child...and can i have some peanut butter with my chocolate...

This is truly bringing history to life. My TT is HERE .

this is a very nice post on the subject. thank you for the "bit 'o history" (now THAT sounds like dull candy)

Nice view from a child's perpective...it's good to be innocent and think only of the chocolate - that's as much as the children needed to know.

Children have a way to see less drama, and chocolate is a good distraction :)