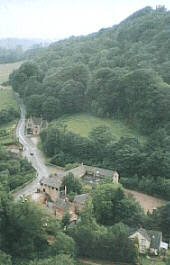 My teenage years were spent in Staffordshire, in the , where my father was head-teacher at the local school. Our little house was buried in the trees seen at the bottom of the second illustration. was perched high on a rock overlooking the River Churnet which ran past our house. It was all very romantic. But I wasn't !

We nestled among the trees

At the bottom of the hill.

The Folly rose above us.

It had started life seven centuries before.

But it had been added to,

Over and over again.

Now it was a conundrum,

If they had asked me

'It was built for the pleasure

Of an ordinary young girl.

It was perched above her

So that she could climb out of her bed

Scratch the frost from her window-pane

It was created so that

A bubble moon could float past it

In a starry sky

And paint a glorious picture.

It was built so that

The girl could inhabit it

And a deliciously lovely princess.

Except that the Princess was slim, ravishing

And had good eyesight.

So don't ask me what it was for.

It was for me.

Was grinning to the declaration "..But I wasn't !"

I close my eyes and I see a white stallion with its mane flying,
galloping down from the Castle to the village - a knight in shiny
armour atop with his cloak flying.... gets down and kneels
before you...

And Malcolm saying " My dear bespectacled Princess, will you
give me your hand..?!!!!"

ah, but you are a princess...with a wonderful story!

Beautiful, beautiful!! You had a wonderful full moon last night to decorate the Folly, just for you!
My castle

What an idyllic place to live. Sigh.

Every little girl is a princess, isn't she? Well done!

What a wonderful wordsmith you are!

I could definitely handle living there! ahhh.

I think every young girl feels that way :) I took my toddler to some castles in Wales this summer, needless to say she can see herself living in one :)

What a beautiful place to have grown up all nestled in the valley. You were very lucky.