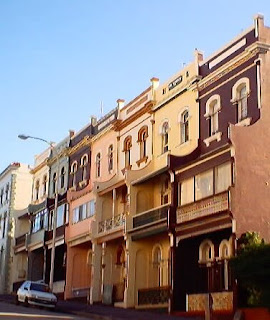 The name of the street, 'Chinchen',  is an odd one. The people of say that it was so named because Chinese market-gardeners once tilled the land on which it was built. My account brings the story of the street up-to-date. Our son, Greg, is the 'Somebody' who renovated the old terrace house. As a sequel, he and the solicitor with whom he became aquainted through the house sale, eventually married and gave us our two lovely youngest grandsons, Harry and Max.

Our son's terrace house was even less grand than the ones pictured, but it had its own charm.

Long ago, for a sweet young bride,

A house was built, with love and pride,

With other terraces by its side;

It stood staunchly way back then.

And the front was made to create a store,

With the windows wide and a big front door.

It was filled with joy, in the days of yore.

And the carts and carriages rolled on fast;

Folk came in and folk walked past,

Knowing it was made to last,

And the house was filled with a family,

And life was all that life should be;

It was fixed for all eternity

But the years went by and the house decayed;

The windows cracked and the curtains frayed,

And wrought-iron 'lace' was no longer made,

As it had been way back then.

There was flaking paint and a thousand stains,

And the turgid smell of the ancient drains,

And the losses gave no hope of gains

And the front step sagged and the cupboards jammed;

The vandals came and the skateboards rammed!

And, as years went by, it became more damned;

It could never live again.

Then the planners came, with a haughty frown,

Saying 'It's unworthy of our town!

Our only choice is to knock it down!

But the wheel has turned and the attitide

That the things of old are just rough and crude

Has been changed to quite another mood,

And we yearn for way back then.

The house is seen by the eyes of youth,

Which discern this very treasured truth,

That the gracious homes never were uncouth.

Now the walls are white and the floorboards shine,

The new stained glass has the glow of wine;

That the house can live again.

Now it stands so proud, with a cared-for gleam,

Strong in its every strut and beam,

All because Somebody had a dream