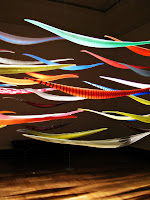 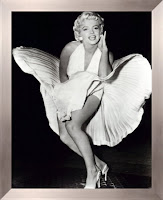 FLOATING FANTASY
One of the world's most looked-at images!
Far more provocative than a nude!
Marilyn Monroe in her famous pose
And no-one could call the picture lewd!
Out on the beach, the girls, bikini-clad,
Show far more flesh than is here revealed
And on countless stages a host of females
Show off attractions that are here concealed.
The secret lies in the floating skirt, of course,
Though the model's attractions can't be denied.
What will the next bold gust reveal to us?
What does Marilyn need to hide?
It's called titillation, that's the name of it;
Think of the wiles of Gypsy Rose Lee!
Lady Godiva used her hair for it;
Men had to imagine, but could not see.
What puzzles me most is Nature's reasoning!
Surely animals aren't the same!
Mating is mating and there's an end to it!
Why do humans play this game?
Why have humans evolved to titillate?
What is the evolutionary cause!
Is it a sign of our species' playfulness
Or just one more proof that all males have flaws!
*
Posted by Rinkly Rimes at 7:33 AM

Dear R.R.: Love how you thematically connect the two poems! "Bleaching the coral" and "Bleached blonde" is very similar. Why are guys wanting the "titillating tease"? Methinks they want too much and too many; variety being ingrained in men. And what about Love? Not just a nice set of gams and/or flirty skirts. "What's that?"I fear many men say when confronted. Oh I am sure they need a lot of inspiration or impetus to get off the boring hampster wheel of a brain and get into the "feel good" mode of true lovemaking. But what do i know; I'm just a goil!

hey this is really beautiful ... i loved the image.

bleached beach and bleached blonde
you are so dang clever!

I love the top poem and I think it brings some important issues. The second poem is very charming, animals have their mating rituals their colorful plumage for example and we have our own rituals I wish ours was less complex though man lol

Brilliance, with a dash of tabasco! xxxj

Nicely put. If humans were not immoral (some of us anyhow!) we'd be a right boring bunch!!lol

Love it! I'm sending a link to my daughter, the poet/environmentalist. Well done!

"Why are humans so immoral?" indeed, Brenda. Endangering the beautiful, wonderful Great Barrier Reef along with the polar ice caps and everything else.

more than immoral - it's insane

I got interrupted - now I don't know whether I said I loved your coral reef, or not! LOL

I enjoyed both your offerings :)

I love both and amimpressed, really impressed at how you linked them.

Why do humans play this game? Blame it on Adam and Eve!!