Patrick Swayze.
America.
Three men united in death! But let's concentrate on the pleasures of continuing life, while we may. SUNDAY was a catch-up day. I knew I had a fairly busy week ahead so I got stuck-in to chores and reading.

On MONDAY I went to Riverwood Downs with my Probus Club .I'd never heard of the resort before but I was keen to see it when I learned that it was in the Barrington Tops, one of my favourite areas of New South Wales.

We stopped for coffee at Stroud, which is named after the town in the UK 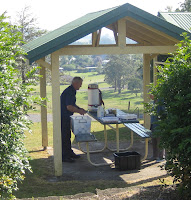 Our driver organised our coffee break.

We had billy tea and damper as a nod to Australiana. 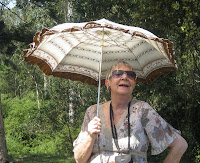 It was just like mid-summer so I fooled about with my parasol.
TUESDAY was another very busy day. The Choir has a yearly engagement at a nursing home called 'Calvary' in the Hunter village of Cessnock (another name from Britain.) After we'd sung I lined the choir members up under the blossoms. I think they look very colourful. 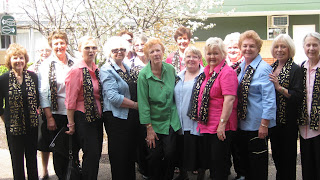 I took the picture.
At night we attended a Book Club meeting. It was at Gwenda's on this occasion. We had read the book called 'Coroner' which dealt with sudden deaths in Australia in the last few decades. It was very informative, particularly as one remembered the cases making headlines. 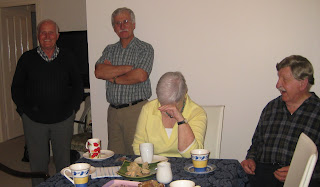 Obviously there was a time when we didn't take things seriously. Les, on the right, is quite a 'wag'!
WEDNESDAY was quite sedate by comparison. We enjoyed our monthly Scrabble session. Although, as you can see, we do allow a little levity! This time we met up at Shirley's house. 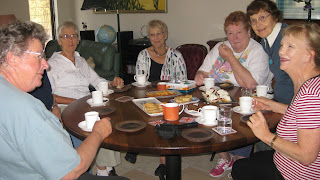 Ann, on the left, is from 'Zummerzet' and she invariably wins. No American spelling for her!
I had a very quiet day on THURSDAY. I went over to Becca's as usual, but Max was getting-over a gastric attack so we all took things very quietly. The one bit of excitement was the fact that Blake had done well in the national exams (I can't remember what they're called!) That should help with his confidence. On FRIDAY we had a rehearsal for 'Jeopardy' and we also discussed doing the melodrama at Marylands in October. Several people wont be available so I had to do quite a bit of reorganisation on SATURDAY. However, the best part of that day was going to see 'The Young Victoria' with Rebecca. We both thought it was a fantastic film; one of the best historic films I've seen for a long time.

The Young Victoria
Till next week.
Brenda Bryant
Posted by Rinkly Rimes at 7:26 AM