BRY ANTICS
September 13th
Of course, the world remembered the Twin Towers this week, not only because it was a tragedy but because it changed all our lives. I thought I'd quote from two pages of my diary written at the time." Sept 10th. Watched a TV program about women in Afghanistan. I get so terribly emotional about their plight." 'Sept 11th. Today the unthinkable happened. America was attacked by terrorists!' " When I read that juxtaposition now I can't help thinking that the women of Afghanistan are no better off now than they were then, and America is certainly not in a better state than it was!
Here there was the Good and the Bad. Let's get the Bad out of the way first. Indian students from Newcastle University have been attacked by thugs in the street! Sometimes I despair. But then my heart lifts because of silly things.... Newcastle is to sell sand from Stockton Beach to China (for building) 'forever'. I say 'forever' because the stretch of sand in question is replenished by tides every year and it has to be removed anyway. That's what I call a good news story. Below see a runner on the very stretch of beach.

From today's paper.
SUNDAY was Fathers' Day here. I'm still in two minds about such 'days', having grown-up in a 'dayless' Britain, but the three grandsons were full of it. We had a low-key family tea-party to celebrate. This was the letter Greg received from Harry. Harry only wrote the signature, but the messages were dictated to his teacher. I love the time-span of the loving! 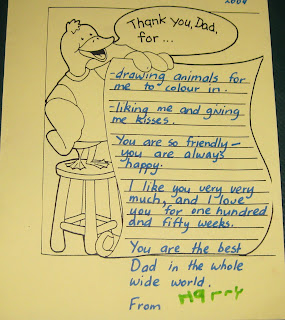 From Harry, five.
Of course, Mum (me) wanted a photo for the Blog! I can't tell you how much my children hate my camera! Consequently, the resulting photo, of all the males in the family, was less than perfect! 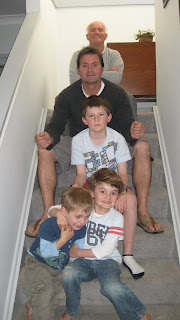 Malcolm stoical, Greg long-suffering, Blake bored, Max and Harry....you name it!
On MONDAY the highlight was an email from an old friend arranging a visit to us next January. Rob was a bit older than me and we knew each other in the village when I was growing-up. I was friendly with his sister, Dorothy. I last saw Rob over fifty years ago so it should be an interesting reunion! We had Choir Practice in the afternoon but it was uneventful.
TUESDAY was an enjoyable day. I took my booklet to the printers, but I have quite a lot of work to do on it as I was advised to choose a larger font and the consequent alterations have thrown the whole thing out of kilter. Anyway, I continued on to Lowlands, to Malcolm's Bowls Day. I always arrive late because the games bore me, but I enjoy the socialising afterwards. It's a Mens' Club and it's good to see the men doing all the work! 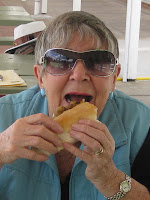 The greedy guest!
On WEDNESDAY I worked on 'Chips Off The Old Blog' and on THURSDAY we both went over to Rebecca's as usual. My photo isn't of Max, for a change; it's of Blake, caught climbing a tree in the garden. He hates posing, so this off-the-cuff shot was a triumph. I think he looks so handsome and the frame of leaves completes the composition. It made-up for the Fathers' Day debacle! 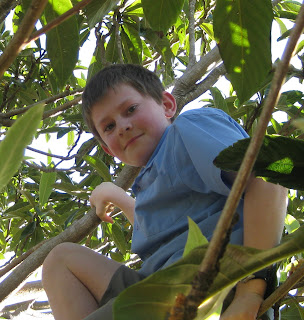 Blake; nearly eleven.
On FRIDAY I reorganised my walk-in wardrobe for summer. Not very newsworthy, but very satisfying. I love the way the following photo shows Spring in the act of springing! Later I went to Hamilton to change library books and smooch around my favourite street. 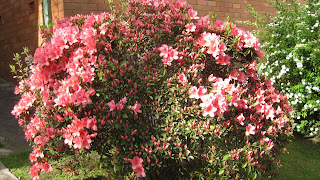 Azaleas
We decided to take our lunch to King Edward Park on SATURDAY because the weather was so perfect. A lot of other people must have felt the same because the park was full of picnics and the beach was a-buzz with bodies. 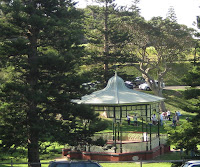 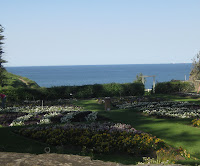 The Beach on the way Home.
Rebecca and Blake came for the evening as Brian was on duty in Sydney. After a meal at the Club, we watched a library video of 'The Diary of Ann Frank'. It was a ten-year-old BBC production and it was very well-done, but we watched all the weekly episodes and it grew more and more sad and claustrophobic. Ann would now be in her middle eighties, had she lived.

Till next week.
Brenda Bryant
Posted by Rinkly Rimes at 10:52 PM

I love the note from Harry to his dad and the photo of your men on the stairs. That photo captures the "real" them! Which is probably exactly what they feared. HAHAHAHA!

The pic of Blake in the tree is perfection. Definitely one that needs to be framed and kept in the heirloom collection!