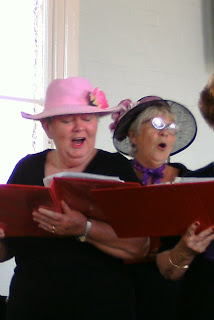 
Singing is a mystery but a joyous one at that!
Why does it bring such pleasure to us all?
After we've had a concert I feel as though reborn,
My vocal chords have made me ten feet tall!
Adrenalin starts pumping when I hear the opening note
As Lois summons magic from the keys.
And it doesn't matter what we sing, the magic's always there....
The ditties mean as much as melodies.
Why are humans musical? What purpose does it serve
In the evolution of the human race?
Sounds I can understand; they helped the Caveman to survive.
But harmony? That surely had no place!
Bird-song? O.K. that's 'language' of a very special sort,
But human-beings have the gift of speech.
We don't need to communicate by going 'Tralala!'
We're quite adept at chatting each to each!
And yet it seems our vocal chords are structured for the job!
Our brains know when a note's exactly right!
And a discord is quite painful while a mixture of some notes
Can cause an utter transport of delight.
Here we see two ladies who've 'tuned-in' to the bliss
Of standing up and singing with a friend.
They're involved in a great mystery but they don't really care.
They only hope that it will never end!
*

I love music. I love singing. And other people love listening to me sing, not so much. Alas.

Your poem put a song in my heart though!

I have been told by several people that there is nothing joyous in my singing at all, nor does it bring pleasure to anyone but myself.

This is a great poem that causes one to think.

In church I found mime gave the best results.

The poem is great, the photo perfect. Thanks for a great one. Wish I sang more!