BRY ANTICS
September 6th
Not such a lively week this week. I developed rather a nasty ear-ache over the weekend and I cancelled a couple of appointments because the pain-killers made me feel drowsy. Anyway, that's all behind me now. It didn't develop into a brain tumour! (I'm verging on hypochondria!)
In world affairs I was saddened by the earthquake in Indonesia, and, locally, we had a really smutty little political drama, resulting in the resignation of a State Minister. He'd been having an affair with a much younger woman, in his Parliamentary rooms, and when he dumped the girl she spilled the beans. I don't care about his morals, but I would certainly like politicians to politik!!! How do they find time for cavorting? On a happier note, the navy ship named after our city, 'Newcastle' spent some time in port and caused a little flurry of excitement.

The dogs don't look as interested as the girls!
I lay low on SUNDAY but Malcolm went to Sydney to a British Car rally at Kings School. He had a good time. 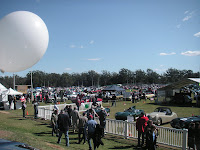 Boys' day out.
I felt well enough on MONDAY to get quite excited about our front garden. It's the size of a postage stamp and we never 'use' it, but it's been a thorn in my flesh for years. The previous owners had two enormous palm trees out there and the soil is still full of the roots. Consequently only weeds have grown properly. Brian, our big, strong and very willing son-in-law, came to transform it for us. We've chosen pebbles, not very thrilling in themselves, but we plan some tubs of colourful annuals to brighten things up. The frangipani looks stark now, but it will soon look more picturesque.

After
TUESDAY was another glorious day (the lack of rain is worrying everyone). It was a beautiful day to go to Figtree Point, where I was giving one of my poetry readings. Malcolm and friend Pam came with me and we had lunch together in Toronto (Oz!) afterwards. The Retirement Centre is very upmarket , with glorious views and every comfort, but I still prefer my own home! 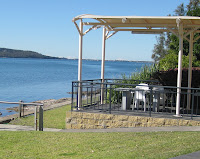 There is even a delightful spot to enjoy the lake!
I didn't go to my Speakers' Club on WEDNESDAY because I was croaky (too much spouting the day before!) and the only bit of excitement was Max's haircut! When Greg came for coffee Max was sobbing and moaning 'No Barber, Daddy!' as though he was going to his death. So after the 'operation' was over they called-back to show me the result! 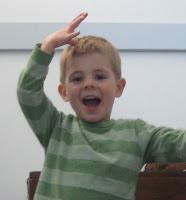 Success!
(There are more shots of Max than the other two boys because Blake and Harry are at school.)
I spent THURSDAY morning in the garden, and I went up to Sharpe's Nursery to buy a bit of colour for Spring. I was pleased to be able to get impatiens as they grow like weeds and are always bright even in our shady back-yard. Last year they had a disease.

A busy time of the year.
I felt quite emotional all day. I was an Evacuee in 1940 in England and a service was held today in Saint Paul's Cathedral in London, commemorating the event 70 years ago. I would have loved to have been there! 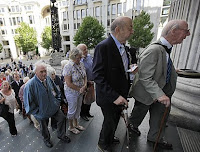 Age has wearied them! (And me!)
The afternoon wasn't as blissful as most BeccaMax Thursdays are. (Doesn't it sound like an indigestion-cure!) We went down to the beach for Max to play in the little creek which empties into the ocean. He's still scared of any ferocity in water. He played quite happily and Brian had brought along beach chairs (he must have remembered how geriatric I was the last time!) But the sky clouded over and it grew quite chilly after a while so we went home. 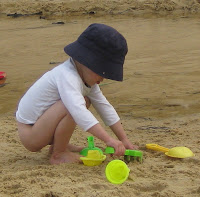 He wont be very pleased with this in years to come!
On FRIDAY I pottered (one of my favourite hobbies!) while Malcolm was at bowls. I did the final check on my jokes-in-verse book which I want to get printed in time for it to be a stocking-filler at Xmas-time.
SATURDAY was a joyous day, not for me, particularly, but Merewether was abuzz and there was the happiest Spring atmosphere I ever remember. Newcastle is, as they say, 'Big enough: Small enough' and today had the feel of a village carnival. Malcolm went off to another car-rally and I went up to the Church fete early to get plants. It hadn't quite opened but there was an air of excitement.

The plant seller.
Then I walked into town past the Sports Oval, which was jam-packed for some important (?) match and on into the monthly markets which are held in the school grounds. I was greeted by a drumming competition, which was very lively. And, of course, I took several photos.

Such as this one of the Drummers.
Meanwhile Malcolm had had a great day out up in the Valley looking at old Tiger Moths! Here are some.

Till next week.
Brenda Bryant.
Posted by Rinkly Rimes at 6:46 PM

A good diary read this week, sprinkled with photographs! I do like a bit of prose now and again!
I applaud the plan of your new front yard - somewhat Japanese in style with a simple accent of something?
Think of it, and I am sure you have, no more weeding (or watering) and this will surely enhance the lines of your house. I am sure my brother-in-law will have commemorated evacuee day - both John and David were evacuated to Wales, and their village was preparing a visit from all still living. Feel better soon!

Even your not-busy weeks are jam-packed full of activity! You are an amazement!

Sorry about your ear ache, Brenda. Having had many of them in the past I know how they hurt.

Nearly everyone here have rock lawns now. We are becoming ecology conscious as well as water savers.

The rhythm band looks like it could stir the blood with the beat.

Hi Brenda, well, for a unlively week, your is positively humming. Well done on redoing your front garden. Look forward to seeing future posts on the annuals in pots. I envy you working in your garden. I'm sitting in a first story flat in a third world country (lol). My dil is ably cutting back and cleaning up my garden back home in South Africa and gives me weekly updates. I loved the report on little Max's haircut! I wonder if it was "ladies feeling down and nostalgic week" last week? You're the third person (including me) who has felt this way. I'm sure, you like me, bounced back again. i hope your ear-ache is a thing of the past. Thanks for an interesting diary. Jo