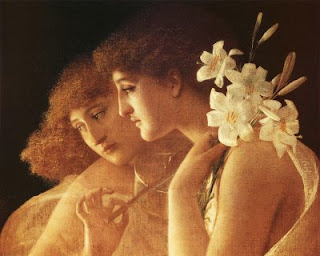 Sellier
This is the SIMPLY SNICKERS choice for this Sunday.

These two angels seem so far removed from our knockabout world! Yet they have inspired me to recall an oration poem I wrote about a very different sort of 'angel'.
ANGELIC ATTITUDES
See the angels, calm and mild,
Removed from all that's coarse and wild.
See the wing that's folded neatly;
Imagine voices singing sweetly.
Feel that wave of deep emotion
Wafting over land and ocean!
*
That takes care of the words required.
But with something else I am inspired.
Talk of angels and I recall
The most unusual of them all.
See below verses I penned
When a certain life came to it's end.
Although a Sceptic, I wanted to say
Something meaningful on that day.
*
Betty died about four years ago. We both belonged to the same little musical group that toured Nursing Homes. It was called The Lemon Drops. I have now left the group and the leaving has made me look back on past performers. Betty was a one-off, a completely unselfconscious, larger-than-life, untidy, genial woman who made magic for the old people. Her specialty was singing 'the old songs', about the bush and the outback; songs the old folk could sing along to, or, at least tap their feet. How they loved joining in 'Tie Me Kangaroo Down, Sport!'! I am not a believer, but I wanted to write something for Betty's funeral, something which would make her laugh. I don't know what the Minister thought about it,
but it made the other Lemon Drops cry.
Here is my tribute to Betty Bohenik.
(See Betty on my PLUS blog.)

THE ENTERTAINER
I've seen pictures of angels:
They play harps and they dress all  in white.
Their long hair is golden and silky
And their diadems shine in the night.
They have soulful and delicate faces
And their silken gowns reach to the ground,
And they fill all the air with their voices,
In melodies sweet and profound.
Each angel resembles another;
They line up as a heavenly choir,
And their golden wings flute out behind them
With the feathers a-shimmer with fire.
Yes, I've seen pictures of angels,
But now things are not quite the same,
For now there's an unusual angel,
And everyone here knows her name.
This angel is dressed in bright colours,
In yellow and purple and red.
There are corks hanging off her akubra
And a stuffed bird up high on her head.
Her largaphone's beating the rhythm
Of a rollicking bush-ballad air,
And a plastic snake's circling her shoulders,
Its tail tangled up in her hair.
And her theme-song's 'The Entertainer'
Playing as she takes her place
With a bright cheery word as a greeting
And a smile on her genial face.
And all the pale angels are laughing
For laughter is her stock-in-trade,
And they clap their slim hands and applaud her
And forget to be holy and staid.
For this angel has taken to Heaven
The jovial joy of her art,
The gifts of her good-natured clowning
And the warmth of her generous heart.
So, though we're deprived of her presence
And her comedy's with us no more,
If we listen we'll hear angel-laughter
As Betty walks in Heaven's Door.

Notes: an akubra is an Australian hat; a largaphone is a long stick with bottle-tops loosely nailed into it; it is hammered into the ground to make a jangly rhythm.
Posted by Rinkly Rimes at 1:31 AM

I wish I had seen the lemon drop angels.

Can see why all the 'lemon drops' are so touched with your poem.

Betty seems to have lived as an "Angel-in-Earth".