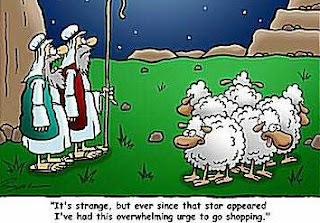 I belong to a Speakers' Club. Our current topic is 'Bah! Humbug!' Writing the speech gave rise to the poem!


BAH! HUMBUG!
I've been asked to make a speech and 'Bah Humbug!' is the title,
And something rather seasonal is absolutely vital.
Of course, we're all familiar with that old Dickensian phrase;
That  Scrooge expletive rubbishing Victorian Christmas Days.
Being assigned this topic has made me think a bit
And I have to say, in many ways, 'Bah! Humbug!' seems to fit!
My up-bringing was Church of England, very, very staid,
So Christmas was a bit subdued, not a big parade.
Three times to church on Christmas Day, and carols, only, sung,
And the all-insistant melody of church-bells being rung.
We had a special meal, it's true and small gifts were exchanged,
But my father'd find the Christmas of this century deranged!
I turned my back on organised religion as I grew;
I simply felt I could not find the proof that it was true.
But a lingering reverence remains for beliefs that are sincere,
And I even envy other folk who hold religion dear.
I'd  never sneer at people who find church makes them secure;
It must be nice to feel one's future's certain and quite sure.
And there's nothing wrong with Festivals, or even spending cash,
Or buying Santa brooches with little lights that flash;
Or getting drunk at parties and flirting with the boss.
But it hasn't got a lot to do with Christ upon the Cross.
And I feel for True Believers as they find their faith demoted,
With cheap and cheerful Xmas cards having Christian phrases quoted!
It pains me hearing 'Rudolph' sung straight after 'Silent Night'.
And 'Jingle Bells' with 'Hark the Herald Angels'! That's not right!
Angel-fairies, flashy Crib-scenes, anything that's bright and crass,
Mixing Christ with Jolly X-mas, cheap old cheerfulness en masse!
I feel for all the truly faithful, seeing their story treated so.
All that whizz-bang arrant nonsense when they just need candle-glow.
I'm all for a Family Festival, maybe at New Year,
A great big Get-Together, with folk from far and near.
And if Spending Big is part of it, well, it helps the economy;
We could pile up New Year presents underneath a New Year Tree!
The truly Christian Christmas could be a quiet affair,
In which we non-believers wouldn't even need to share.
But the mad conglomeration in which now we all take part
Pains me because, if he were here, it would break my father's heart.
He'd feel that something special had been horribly debased
And he'd miss the gentle reverence which now has been replaced.
Here's to a Family Festival, flash presents, a big feed!
But let's not mix it up with someone's truly Christian creed.
BAH  HUMBUG!
Posted by Rinkly Rimes at 1:20 AM

Hello there!
Thank you for visiting my blog the other day.
I love Dorset and that coast line is wonderful.
We do have relations in Penrith NSW, they keep asking use to go, it's the long flight..
I am RC religion, what I have found is that the priest's today have a sense of humour, Now when i was growing up they scared me and it put's you off going to church...
I like it much better now you dare smile or even laugh if something happens that is funny...
Just my thoughts :-)

So right on so many points but so many of those of truly Christian creed don't really seem to mind the greed!