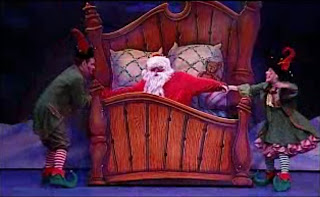 LATE!
What if Santa Claus is late
On that most important date!
If he oversleeps on Christmas Eve
He'll miss the time he has to leave!
What if he gives a grumpy groan
And says 'I want to be alone!'?
What if he simply shakes his head
And says 'I can't get out of bed!
Leave me for just a moment more!'
And then turns over and starts to snore!
What if they tickle him and shake him,
But simply, simply cannot wake him?
He needs to be an early riser
When he's the Christmas supervisor!
Think of all his preparations!
Maps of all the different nations,
Weather forecasts to peruse,
Checking every local news!
Laying out his red regalia
(A thinner version for Australia!)
Taking toys down from the shelves!
Dealing with excited elves!
Making sure that each one packs
Toys in correctly-labelled sacks!
Working-out the wind-direction!
Doing a final sleigh inspection!
Counting reindeer! Is one missing?
Giving his wife a final kissing!
If he oversleeps on Christmas Eve,
He'll never be ready in time to leave!
He's got to be cheery, alert and bright,
To deliver the toys at dead of Night.
If he's only delayed by an hour or  two
It just won't do! It just won't do!
What will all the children say
If he arrives on Christmas Day?
The children will see, in a bright blue sky,
Santa and his sleigh go by!
If he arrives then, for goodness sake,
The little children will be awake!
They'll see him then! That will be tragic
And ruin all that Santa magic.
It's too dreadful to contemplate.....
Dear old Santa being
LATE!

this is a really cute poem!

Another good one! always enjoy your poetic take on things!

Loved it! Especially the 'thinner version for Australia'...hadn't really thought of that before but he sure wouldn't want to be wearing the northern version in your summer. :)

dont be late santa... every body is waiting fou you! ;)

What a horrific thought :-)
Loved this.

Santa Late! Nah! He is magic and would fix the clock.

Another good one. Love your poetry. Sure hope Santa isn't late!

This is so much fun! I really enjoy reading your rhymes :)

Your verses are always such fun! And what's more they really sing with rhythm and rhyme. If Santa is like me, there's a real danger that he will oversleep, especially if he's been working late getting ready for the big night.

That was such fun! The thought of Santa being late is worrying indeed!

oh wow! this is just SO delightful! Wish I had little ones to share it with.
I can really see this in a children's picture book Rinkly!! Can't u just see the adorable illustrations? (although the thought that he may be late, may terrify the little guys!!)
giving his wife a final kissing... oooh I just have to re read this!
Merry Christmas!

Fun, indeed! I'm going to hope it doesn't happen but if it does, I'll smile and think of this poem!

I adore this! It's light, upbeat, springy and just delightful! BTW, I'm here for the first, but definitely not my last, time from Sun. Scribblings.

It's good Santa still sticks to tradition. And so sweet of you to have alerted him at the right time very poetically :))))

Thank God, he doesn't take the easy way out ordering toys at ebay and asking them to ship it out and deliver by Fedex via chimneys..!!!

Gorgeous poem. I hope they give him a lie-in on Boxing Day.

Fortunately, Santa is magic. A very nice seasonal ode to the Man in the Red Suit who brings children so much joy.

So cute..Loved this...I will keep my fingers crossed he won't be late..

I don't know how you do it! And I am amazed each time I read one of your poems ... just fantastic. I love it.

No, we don't want him to be late for this important day ~ Enjoyed this ~

What fun! Even the rhymes contribute to the smiles here!

Lots of fun, thanks for this!