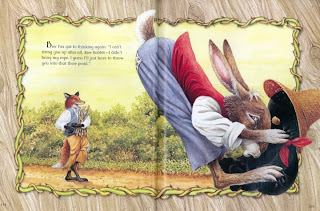 
Uncle Remus told a story, as was his usual habit,
About Brer Fox, a crafty one, and, yes, our friend Brer Rabbit.
Now both were clever creatures, we've known that for an age,
And both of them were capable of getting in a rage.
One day, to trap Brer Rabbit, Brer Fox hatched up a plot.
He found some tar, all sticky and, from the sun, quite hot.
He fashioned it (I wonder how) into a sort of creature
With body, limbs and hair and face, yes, every human feature.
He propped it up against a rock and said to himself  'Well, maybe
I can catch Brer Rabbit with this doll, this beautiful Tar Baby!'
He hid behind a leafy bush as Brer Rabbit walked along,
Twirling his cheeky whiskers and singing a little song.
'Trala! !' sang the Rabbit 'I'm happy being me!
But, hey! I see a stranger! Who can this fellow be?'
Now Brer Rabbit loved to make new friends, so up he spoke, on cue.
He went right up to the Tar Baby and said 'How do you do?'
Of course, there was no answer, for Tar Babies don't talk!
(And there'd have been no story if the Rabbit continued to walk!)
'Where are your manners, Baby?' Brer Rabbit said outright;
'Answer me when I speak to you! Just try to be polite!'
The Tar Baby just sat quite dumb, and didn't say a word.
'Answer me, you varmint! I greeted you! You heard!'
Now the Rabbit made his great mistake, he struck a fighting pose
And with his paw he punched the Baby on its little nose!
Of course, Brer Rabbit's paw got stuck! Oh how tight tar can stick!
And at once he realised that he'd been victim of a trick.
In desperation he began to punch and writhe and shout,
But soon he was enmeshed in tar and unable to get out.
Poor Rabbit!  What a sorry sight! Black and sticky! Trapped!
And then the laughing Fox emerged! Oh how he cheered and clapped!
'What shall I do with you, Brother?' said the Fox, with the upper hand.
'You are entirely in my power, as I'm sure you understand.'
He thought a bit, that wily Fox, with his paw beneath his chin
And then announced 'The river! I'm going to throw you in!
Rabbits can't swim!' the Fox rejoiced, 'So you will drown for sure!
And then I won't be troubled by Brer Rabbit any more!'
Did I tell you that Brer Rabbit was well endowed with brains?
He quickly found a way to turn his losses into gains.
'Please throw me in the river, Brother Fox, for I feel dry!
But don't throw me in the briar-bush for I shall surely die!
The wretched thorns will get me and poke out both my eyes!'
Thus did the Rabbit continue, with loud and heartfelt cries.
'I'm wanting you to suffer' said the Fox , 'The river's out!
But I've thought of something deadlier you haven't thought about.
I'm going to build a blazing fire and throw you in the flames!
I'm tired of all your fooling and silly Rabbit games!'
'Please throw me in the fire, Brer Fox!' Brer Rabbit quickly said;
'But not into the briar-bush or I will end up dead!'
'Since fire doesn't scare you, I'll hang you from a tree!'
Said the wicked Fox, licking his lips, and grinning nastily.
'Please hang me from the nearest tree!' said the Rabbit 'With a rope!
But don't throw me in the briar-bush or I will have no hope!
I love to swing from the branches but, Fox, I'm on my knees…..
Don't throw me in the briar-bush! Please! I beg you! Please!'
'It seems you love to swing from trees and you fancy licking flames,
And you also  like rushing rivers! I'm tired of your fun and games!'
Said the Fox, and then he continued 'To cause you maximum woe,
Into the nearest briar-bush Mr Rabbit you will go!'
He tugged and pulled at Brer Rabbit, till, at last, he had him free,
While the Rabbit moaned and screamed and wailed, a picture of misery.
The Fox found the nearest briar-bush, swung Rabbit by the ears,
And threw him into the briar-bush, the greatest of all his fears!
At once, Brer Rabbit sat up and grinned, as only a Rabbit can,
Knowing he'd tricked the wicked Fox and ruined his ghastly plan.
'I was born and bred in a briar-patch! I'm going to live, not die!
You're bigger than me, but you've got no brains Mr Fox! Goodbye!'
With that he hopped out of the briar-bush, over the hills and away.
Brer Rabbit escaped and we know he lived to fight another day!
Posted by Rinkly Rimes at 6:55 AM

I was appalled when this story was called racist. I remember reading it when I was quite young and that it was part of Disney's "Song of the South" which my little sister and I absolutely loved and could sing all the songs. (And they don't show that 'cause it's racist.) I get tired of people who perceive racism in the smallest things.

Another classic tale so well penned by you. Wonderful!

I didn' know this tale...Thanks for sharing!It reminds of me some stories from"Le Roman de Renard" ou La Fontaine
A lovely illustration!

Thank you for renewing a memory for me! This story was read out to me as a child in class. I loved it.

Thanks for the memories Brenda.
It has been ages (I won't say how many) since I have heard this TALE.
Perfect for ABC Wednesday letter T.

Brenda, this is so so amazing! I thoroughly njoyed it. I remember Uncle Remus, I had one of his many books as a child.
Dxx

What a funny story!

Its been such a long time since I heard this story. Its a shame that some think it has racial tones.
I am glad Disney preserved it and wish they would show it again.

My favourite cartoon program I watch with my daughter even today..!!! BUGS BUNNY. Written so well.

I love it! I used to read this to my kids when they were young.

A wonderful tale and great post for Ms. Jenny's Alphabe-Thursday!

Thank you! What a trip back in time for this 68 year old...when I see those words, I am once again a little girl, curled up on my Mom or Dad's lap (they both read to me)...a sweet memorable post.

RR, I grew up in Atlanta, Georgia, which was the home of Joel Chandler Harris. As a child, I went on many school trips to The Wren's Nest, where he lived. I love the Uncle Remus stories, and read them to my children.

We should all have had an Uncle Remus as a child....thanks for the memories:)

What a fantastic rhyme. I remember the story well from my childhood.

Visiting from Alphabe-Thursday for the first time.
Great post for the letter U.

I remember hearing about these tales when I saw Song of the South as little girl.

I loved that story when I was a child!

I absolutely love this tale...