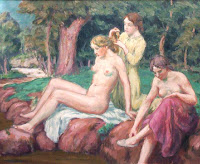 T.F.Simon
would probably be surprised to have his art associated with a joke but I had a hard time finding a Blond, a Redhead and a Brunette!
BLOND BLOOPER!

Picture, Readers, if you will, an island in the sea,
And three delightful castaways, sitting beneath a tree.
The first, called Rita, is brown-haired, while Cora's hair is red,
And Wilma is a natural blond, (at least, that's what she said.)
They've been cast-up on the island for many weary days
And they've had to entertain themselves in a multitude of ways.
In the picture they're sun-bathing, by a little island stream,
But I think they're taking quite a risk! I can't see sun-tan cream!
They're bored to tears just hanging-out and waiting to be found.
But what is this? They've found a bottle lying on the ground!
You guessed it, when they pop the cork, a Genie spirals out!
Which makes the girls excited; see them cavort and shout!
The Genie speaks to Rita first . 'What do you wish my dear?
Name your wish, for that's the reason I've been magicked here.'
'How I long to see my family!' cried Rita, straight away!
'Let me return to those I love!'... Said the Genie 'I obey.'
There was a flash, a thunder crash, and Rita zoomed back home
Making a vow, in transit, that nevermore she'd roam.
Now Cora said 'May I return to my own dear native land?'
Said the Genie' Straight away, my dear; your wish is my command.'
In a puff of smoke she disappeared, to , Arkensas;
The little space where she had been was all that Wilma saw.
Finally it was Wilma's turn; she considered her request.
Of all the wishes she could make, which did she think the best?
The Genie waited then he said 'Is there nothing that you lack?'
'Well' said Wilma (she was blond)

Love it! As for Cora, not being a blond, she might find the island preferable to Little Rock! Lol!

Marvelous Brenda..... In one reversing wish Wilma DID it..!!!!! Loved the prelude about their having a good time and sun-tan and the works.

You've heard of the honest wood-cutter story ? where the fairy appreciating the honest answer of the wood cutter gave him the gold and silver axe too.

A different wood-cutter encountered the following situation, which you may find amusing.

Here the wood cutter's wife falls into the river, he cries for help and the fairy appears again...

The fairy asks him first if Doris Day is his wife and he vigorously nods and says .. "yes.. yes". The fairy gets angry and wanted to give him another chance....

and she comes up with.. let's say Marilyn Monroe and again the wood cutter says... " Yessssss". The fairy loses her temper and chides him for his false statements and asks him the reason for his lying...

to which the man answered, “Oh fairy! Don’t be annoyed with me. I know what happened to the other wood cutter. You gave not only his wooden axe, but the gold and silver axe too.

Had I told you the truth you would have given me not only my wife, but the other two ladies too. You know how difficult it is to manage one wife. How can I bear the burden of three wives? :))))