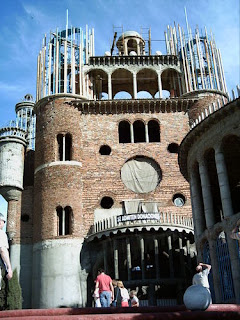 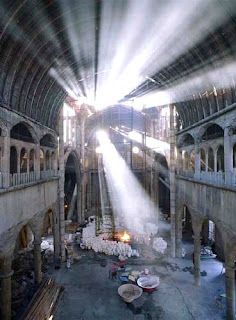 (See 214 and 216 for my SUNDAY SCRIBBLINGS and SIMPLY SNICKERS entries.)
Forgive me if this story is already well-known! I have only just discovered it and I'm full of enthusiasm. Please read one of the many full accounts that are on the Web.


WHILE MY BACK WAS TURNED!


To paraphrase T.S. Eliot,
'My life's been measured in coffee spoons'.


A bit of work, a bit of chat,
A bit of harmless this and that.
But was I really on a mission,
Or did I give myself permission
To play at work and work at play,
And flit about from day to day?


Really! Since 1961
What exactly have I done?
Just built a 'harmless' little life....
Teacher, mother, friend and wife.


Meanwhile, while my back was turned,
Someone with real ambition burned!
In our thirties, way back then,
He turned his back on affairs of men.
While I just skittered about the place
A stupid smile on my fatuous face!
No, it wasn't quite as bad as that,
But it was no Magnificat!


Mejorado del Campo, a name that rings,
With the liquid sunshine of Spanish things.
And it is there that Justo came
Not to anguish, not to blame,
But to build his own stairway to the sky,
Year by year as time went by.


Removed from his Order, for he was ill,
He felt a heavenly calling still,
And he sold some land for the wherewithal,
To build a Cathedral, high, wide, tall!


Yes! A Cathedral! Give some thought
To hobbies like knitting, bird-watching, sport!
Just think how I have spent my time
Writing nonsense things in rhyme!
For forty years, you must agree,
We haven't shown much constancy.


Whereas Don Justo made a start,
With religious fervour in his heart,
To dig and delve, and scrimp and save,
All the way till he reached his grave.
On his own he made foundations,
Without any plans or specifications.
Built the walls and built the piers!
Single-handed! For forty years!


Now Don Justo and I are old.
His story continues to unfold.
He works each day on his great vision,
Not always with excellent precision.
In fact, the powers that be have stated
That his great Cathedral is over-rated;
That it isn't safe. They come from the town
And view its magnificence with a frown.
He knows that, one day, it must go.
But still he works, though he's old and slow.


But for now it points up to the sky
A little quirky but wide and high.
How he's laboured, how he's yearned!

And all of it while my back was turned!
Posted by Rinkly Rimes at 6:25 AM

Reminds me of my lack of accomplishment in light of so many others!

The power of faith and dreams is amazing.

He didn't get planning permission apparently. The councils would pull it down here, dream or not. They might have a little more faith in Spain.

That looks wonderful Brenda.
Where is it though?

Bear((( )))
ps:Your word verification has had some funny *words* lately.
Not only do I enjoy reading your blog but get a laugh at some of these *words* here.
Today is glyzalli.
Hmm I wonder what that could mean.

well it is a new one on me.

I think your life's measured in RINKLY RHYMES - right ?