FREE WRITE FRIDAY
http://kellieelmore.com/
chose the illustration
THE SPARE BEDROOM
Luke and Rose were coming to stay;
The spare bedroom was prepared.
I washed the rose-sprigged coverlet
And made sure the room was aired.
I thought to turn the mattress
So that they might sleep better.
And that was when I found it,
The old and faded letter.
No-one had used the bedroom
For, maybe, seven years.
And, when I last had used it,
I had left the room in tears.
You swore that you'd apologised;
I said your words were fake;
You said you'd penned a letter;
A great deal was at stake.
'I left it on the pillow'
You said  'I know you've read it.'
I said you were a liar!
I wish I'd never said it!
I see you now, walking out the door,
On your face a look of pain.
That was our last meeting:
We never met again.
I sat and read the letter,
It spoke so honestly
Of regret about our quarrel
And the feelings held for me.
I wonder where you are now;
Things change in seven years.
But just as I did last time
I left the room in tears.
*
------------------------------------------------------------- 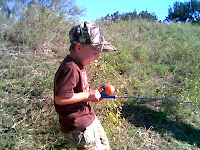 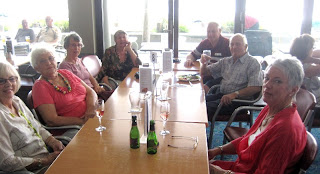 Linda and Colleen are in the foreground. They haven't featured on my blog before.

Unfortunately, the view didn't materialise in the group photo but this picture will give you an idea of what we could see through the window as we had our meal.
Posted by Rinkly Rimes at 6:28 PM

Feast for the tummy and the eyes..!!!

A wonderful post. Great story on Kellie's prompt. I also love the poem and picture of the boy fishing. Indeed it is a memorable and wonderful thing fishing when young. It's not so bad when your old either!

your poetry is always so very touching and I look forward each week to reading what you have created from my prompts. Thank you so much for writing for me again. ♥ Also, if you are on Twitter, please let me know so I can tweet your posts on there and direct others to your wonderful blog!
@kellie_elmore

This is my first visit to your blog and I enjoyed reading all the posts with the letter...
The letter poem was well written and
tweaked the sighs.
Peace,
Siggi in Downeast Maine.