We've been enjoying astounding weather lately. With Spring still ten days away. we've been basking in balmy temperatures. The photograph was taken last Sunday in Winter at Merewether and published in the local paper.! Mind you, I expect the water was very chilly!

Our local news has been dominated by a huge commercial win for Western Australia. Liquid gas will be sent from there to China for the next few decades at least and this will create over 6000 jobs in the area. My own state of NSW isn't doing too well, but a lot of the profits from the gas venture will go into the country as a whole. As far as international news goes, I have been intrigued by the American angst over socialised medicine! I have lived under a social-medicine scheme all my life and I've felt utterly secure. Of course, we top it up with private insurance but that is only so that we can go into hospital at a time and place of our choice if we need to.
On SUNDAY we went for a walk at Honeysuckle. This is a fairly new area along by the river and the walk was delightful. We accidentally met-up with neighbours and walked together.They are keen to buy in the area so there was much discussion. 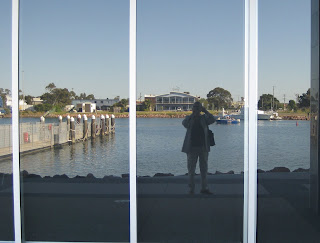 I couldn't resist reflecting in one of the new buildings. 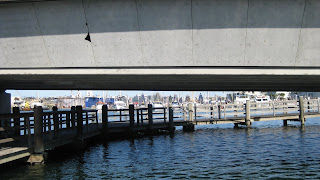 The old bridge has been left as a fishing-bridge under the new one. 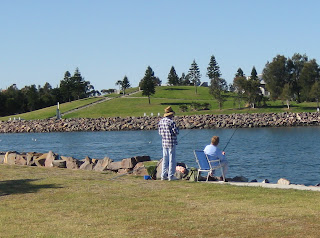 Others chose the river-bank. 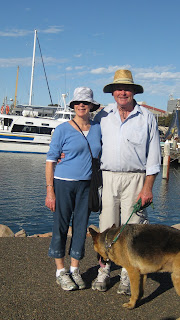 June and Max with whom we walked. 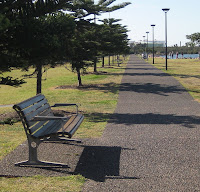 A very pleasant afternoon.
MONDAY was Probus Day. We had a Committee Meeting in the morning. Since I'm no longer President, I find this year's meetings pleasantly relaxing and I always enjoy the convivial lunch afterwards. In the afternoon it was Probus Choir Practice which was unusual, as quite a serious discussion cropped up regarding non Probus Members joining the choir! 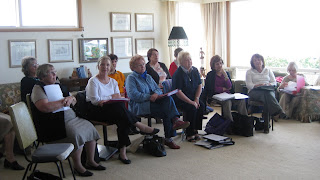 Members of the Choir discussing a very serious problem!
(Lois' house looks right out over the sea and is a lovely place to meet.)
TUESDAY was a domesticated day (so much so that I can't remember what I did!) But, in the evening, we went to Judith's for Book Group. Thereby hangs a tale! I was chosen to be 'leader' so, ages ago, I got the book from the library so that I could read it thoroughly. My daughter Rebecca leafed through it and said 'Mum! You can't do this book! It's full of nasty sex and swearing!' On her advice I took the book back. However, the description seemed to attract members of our group who shall remain nameless(!) so I went to the library to get it out again! Only to find there were 56 people ahead of me and only 13 copies!!! So we had to have a discussion without a leader! The book? It's called 'The Slap'. Having listened-in on the discussion it sounds awful! But it's won prizes so who am I to say? 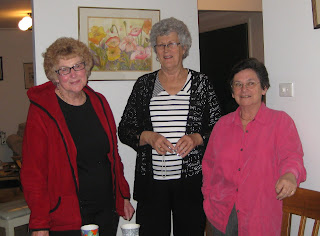 Favourite Book-Clubbers; Gwen, Caroline and Ann.
WEDNESDAY was even more domesticated that Tuesday, but it was purposefully so! I spring-cleaned my computer, getting rid of things, sorting, etc. I even succumbed and reacted to two memes! I just love 'Carry On' and 'Acrostics' so I reacted against my better judgement. I also looked into Twitter. I have an account but I'm going to close it. It seems a lot of trouble for very little. One person approached me to be my 'friend' and I'd have been his five-thousandth!!! Life is too short! In the afternoon I enjoyed another hilarious Scrabble Session at my house. Maureen and Susan are on a cruise together and we're wondering what they'll report when the get back as they're both such volatile women!
Max wasn't well on THURSDAY and Becca encouraged him to sleep a long time so we didn't go round until afternoon tea time. Then, when Greg arrived with Harry, we were all together, including Brian, who's on a months leave from the Fire Service, but barring Michelle, who was at work. I love family gatherings. Greg gave us the news that Harry has got into the local Catholic School. I'm in two minds about this as the class-sizes are 30, whereas only 20 is allowed in Government schools, and I have such anti views about religion. But Greg wants him to go to the Catholic High School later on as it's so good. So we'll see. I'll be too old to worry about it!
FRIDAY was busy. I went to my U3A class in the morning and we discussed 'War Baby' by David Malouf. Jean is a good lecturer and I think I like the group just as well now as I did when it was Playreading. I had to dash home as Michelle wanted me to look after Max while she went into work to sign documents. He was very sweet as usual. He's talking non-stop now but I'm afraid it's not always in English! I tried to get a good shot of him, but, as you can see, he wanted to have fun instead! 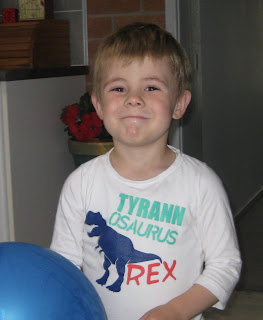 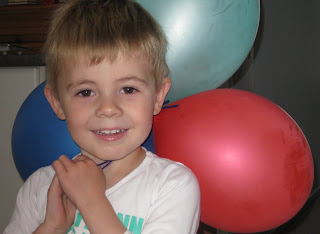 Success!
On SATURDAY I gave myself neck-ache on the computer. I looked into Stumbleupon and became completely hooked on what I found there, particularly the photographs.I couldn't find a category of poetry though so I'm just hoping something comes up under 'Writing'. I'm just about to watch a recording of 'Lark Rise to Candleford' which is unashamedly sentimental and unrealistic, but which gets me misty-eyed every time! (We've got a bar of dark-chocolate-and-raspberry too!)

Till next week.
Brenda
Posted by Rinkly Rimes at 7:16 AM

All of the photos were great, but the best one was the last. Max is a beautiful child and that smile would melt granite.

Yes, the addition of more photographs is great. I am wondering who the author of 'The Slap' is. As we move into Autumn you move into Spring - August is at last being typical of the month, hot and humid, but is still offering rain showers and the occasional thunderstorm which is unusual. It is a great time to stay in doors with a/c and try to deaccession books accumulated since the 1960s! I will probably post something about that - it is a difficult and painful process. Max looks good - a wonderful age.

Sounds like a very busy week! We're enjoying our first taste of Autumn, and it's fabulous!

Adore the photos -- what a precious and beautiful family :)
Sue