BRYANTICS
August 16th
This week has been infirm! I felt arthritis coming on when we went Sydney last week; the journey on the train was uncomfortable. And it got worse over the week, until, today (Saturday) it suddenly went! Being in pain is certainly ageing! But it wasn't just my bones that played-up! My computer went on the blink and was at the 'doctors' for several days! This was almost worse than the arthritis! More like an amputation! So I must apologise for not replying to recent emails. Mind you, now I'm off meming for a month my 'followers' have dwindled too. I hope I get them back in September.
World news was dominated by the dreadful floods in Asia! What a disaster. And we had a minor disaster here, too (though, of course, it was very major for those involved!) A plane went down in the highlands of Papua New Guinea and all thirteen on board were killed, nine of them Australians. 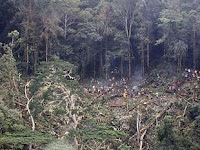 The crash scene
On SUNDAY we had a lovely day out. Our friend Les drove us all to 'The Doylo', which is the abbreviated name of the Doyalson Club. We had lunch there and then continued on to Woy Woy Little Theatre where we saw a play called "Stella by Starlight'. It was set in Ireland. It was easy light entertainment but fairly forgettable, I thought.

The local cast.
I enjoyed one of my periodic pleasures on MONDAY. My very dear friend, Philip, is a music teacher and he organises concerts involving his pupils, at the City Hall, in the Mayoress's Parlour. He always asks me along as light relief and I do a few poems. I feel quite sad when I witness the talent of young performers, because so many are bound to be disappointed in the future. I was pleased when one girl, who sang light opera, said that she wanted to be a mathematician! Very realistic. 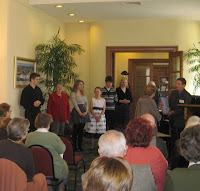 Receiving our accolades (and jars of home-made biscuits).
On WEDNESDAY I worked on 'Pirate Pie'. It's a play I wrote last year, but I've simplified it and added more songs so that we can play it with fewer participants. Our little melodrama group suffers from 'Granny Duty' very often, so the fewer people are involved at any one time the better.
THURSDAY was another brilliant day. This must have been one of the most glorious winters on record. It's been chilly at times but the sky has been blue. Most days have been 'perfect English-Summer' days and a lot of my readers will know what I mean by that. It was another 'Max' day and we took him to Redhead Beach. Brian threw the ball for Banjo (called Bobo by our late-speaking Max) as Redhead is a dog-friendly beach, and Max spent a lot of time scratching in the sand with a stick. He was a little afraid of the pounding waves. I found the walking on sand very exhausting. The sand is very fine, silvery and squeaky and very hard to walk on! I've given up my idea of trekking over the Sahara!!! Here are a few shots of our day. 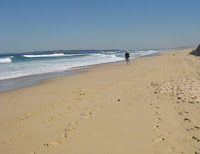 Brian and Bobo and the deserted beach.

The waves Max was afraid of. 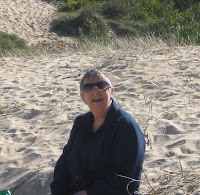 Me waiting to be helped up off the beach!!!!! I felt ninety that day!
On FRIDAY I should have gone to U3A in the morning, but the lovely young Jeremy returned my computer and I had some catching-up to do for the afternoon. This was when we rehearsed at Souths. 'Jewelled Jeopardy' is coming on well. Our difficulties arose in organising Dress Rehearsals etc. We're all so fully occupied all the time!
On SATURDAY I did chores in the morning and went to the Sports Ground in the afternoon. The weather was so joyously springlike that I felt like soaking up the atmosphere. As it was I discovered a crowd of Rosellas (small colourful parrots) attacking new blossoms. I was clicking away like mad when my battery went dead! But I did get one good shot. Here's the Sports Ground on a sunny Saturday in Spring. 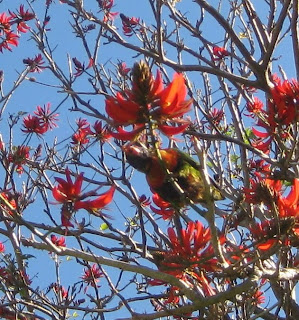 Caught before the camera 'died'!
Till next week.
Brenda
Posted by Rinkly Rimes at 7:50 AM

You're busier than ever! No wonder you wanted the month off blogging. I suspect your friends haven't deserted you. they are just having a little vacation from commenting. I have been reading myself and not saying much, since you said you'd not be around anyway. We'll all pop back just as soon as you roll out your blogging banner and signal us in.

I hate it when I am without computer or internet. Even if I make other plans and have no wish to use it, I like knowing that I could if I wanted to!

Yes, I am already wishing I had a portable Notebook to take with me on my mini-trips to Long Island. Using someone else's is not the same thing. As for First Impressions, I am currently struggling with just such a feeling about one of my grandson's friends!! It is strange how one might feel about a person, yet someone else does not, apparently. Love your photogaphs!

I'm just back and playing catch-up. I hope your arthritis has ceased to plague you. I am a fellow sufferer and mine is ripe at the moment. Going on the cruise didn't help, walking the length of the ship over and over again was a killer.

There are those of us who will never leave you no matter how long a hiatus you take!

You may have only managed one shot of the Rosellas, but it's a beauty!.

What an active lady you are. I get tired just thinking about your full life style.

I couldn't walk in the deep sand of a California beach six years ago without help; now I don't think I could manage it with help. It's like walking through glue.