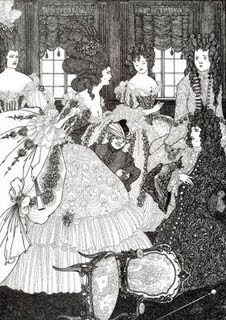 Aubrey Beardsley
I'm still 'eschewing'(!) memes but I couldn't resist this one!
SIMPLY SNICKERS
http://simplysnickers.blogspot.com/
has given us this picture to think about.
EMBATTLED!
'The Battle of the Beaux and Belles'
What a strange sort of story it tells!
We are given no indication
As to what has caused the odd situation!
Let us just imagine this 'beau' went too far!
(You know what all young gentlemen are!)
There are onlookers too, so I've supposed
That the gentleman kneeling merely proposed!
A 'speech-balloon' could put me right!
And yet there must have been a fight!
A chair knocked over! What a mystery!
With costumes hinting at ancient history!
* 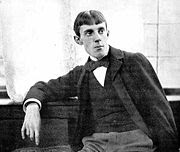 However, in Aubrey Beardsley's art,
Sexuality played a part.
The above is a very mild example,
Of 'Lysistrata', just a sample.
In a prudish age his imagination
Gave him a reckless reputation.
And the worst of his pictures, he openly said
Should be destroyed when he was dead.
It's sad that someone such as he
Should have died in his twenties of TB.
*
A very different sort of erotica here:
http://rinklyrimes.blogspot.com/2009/08/dilemma.html
Posted by Rinkly Rimes at 7:11 AM

So glad you opted to blog before September - and at Simply Snickers too!

This is so clever, especially with all the biographical background.

By the way, I almost fell out of my chair to read your later post about the unexpected telephone call. Somehow, the comment button seems to be missing on that post.)

Next week's post will be up in a moment:

howwwww did you find out that I was wondering whether the pictures were destroyed :)))