﻿
POETRY TOW-TRUCK
http://djvorreyer.wordpress.com/
suggests talking to someone who can't answer-back. 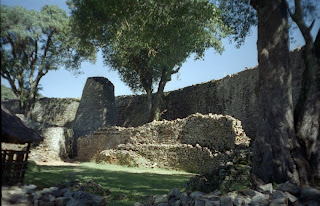 Great Zimbabwe
ZIMBABWE
Zimbabwe? It's surely a country or state?
Why should a ruin be known as 'Great'?
What's the significance of this
Strange, unusual edifice?
First the name....it means, they say,
'Large Building' said the Shona way.
These ruins are ancient; a thousand years old,
But no-one's sure what they used to hold.
Thousands of Africans may have existed
Within these walls, now heritage listed.
What we see is only the heart
Of extensive buildings, a tiny part,
For Great Zimbabwe at one time covered
Hundreds of miles, as they've now discovered.
Between the Limpopo and Zambezi
Finding gold was very easy,
So the founders of Great Zimbabwe, for sure,
Were very rich, with gold in store.
The Europeans, when they arrived,
Doubted that Africans had contrived
To build such a solid monument;
They said Africans were too indolent.
'Surely' they said 'Only men of our race
Could have built such a very important place!'
But, as has been proved by carbon dating,
Zimbabwe is old, as some had been stating.
When old 'Rhodesia' at last became free
The Africans thought what its name could be
And 'Zimbabwe!' they shouted with one voice,
It was nearly everybody's choice.
*